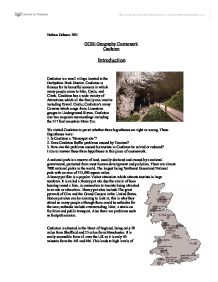 Nathan Dobson 10N GCSE Geography Coursework Castleton Introduction Castleton is a small village located in the Derbyshire Peak District. Castleton is famous for its beautiful scenery in which many people come to hike, Cycle, and Climb. Castleton has a wide variety of Attractions which all the family can involve including Peveril Castle; Castleton's many Caverns which range from Limestone gouges to Underground Rivers. Castleton also has exquisite surroundings including the 517 foot mountain Mam Tor. We visited Castleton to prove whether three hypotheses are right or wrong. These Hypotheses were: 1. Is Castleton a 'Honeypot site'? 2. Does Castleton Suffer problems caused by Tourism? 3. ...read more.

It is called a Honey pot site due the simile of bees buzzing round a hive, in connection to tourists being attracted to an site or attraction.. Honey pot sites include The great pyramid of Giza and the Grand Canyon in the United States. Honey pot sites can be amazing to look at, this is why they attract so many people although there could be setbacks for the area; setbacks include overcrowding, litter, a strain on facilities and public transport. Also there are problems such as footpath erosion. Castleton is situated in the Heart of England, being only 18 miles from Sheffield and 25 miles from Manchester. ...read more.

Speedwell Cavern Set High above the village of castleton, Speedwell Cavern takes you on a incredible underground journey which sometimes lasts up to an hour. The entrance is an almost Hidden cave which leads down to an underground canal which you then start your boat trip through the 200 year old mine. A wide selection of Gifts and mementos are available to buy to remember the amazing boat trip, including Jewellery made from the Blue John stone. Peak Cavern Set in the middle of Castleton, A Unique 'World' Which consists of Rock Formations and eerie Sounds. Tours Last up to an Hour with a riverside walk, A limestone gorge, 280ft vertical cliffs and a traditional rope making demonstrations that can be enjoyed by people of all ages. ...read more.

A satisfactory introduction though it is lacking in some respects - references must be included when using sources of information, explaining why the hypotheses were chosen is important and justifying why this location was chosen would also strengthen the answer.