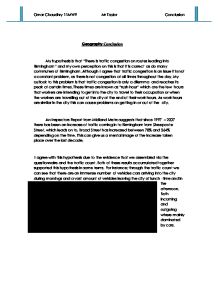 Geography Conclusion My hypothesis is that "There is traffic congestion on routes leading into Birmingham" and my own perception on this is that it is correct as do many commuters of Birmingham. Although I agree that traffic congestion is an issue it is not a constant problem, as there is not congestion at all times throughout the day. My outlook to this problem is that traffic congestion is only a dilemma and reaches its peak at certain times. These times are known as "rush hour" which are the few hours that workers are intending to get into the city to travel to their occupation or when the workers are travelling out of the city at the end of their work hours. As work hours are similar in the city this can cause problems on getting in or out of the city. An Inspectors Report from Midland Metro suggests that since 1997 - 2007 there has been an increase of traffic coming in to Birmingham from Sheepcote Street, which leads on to, Broad Street has increased between 78% and 364% depending on the time. This can give us a mental image of the increase taken place over the last decade. I agree with this hypothesis due to the evidence that we assembled via the questionnaire and the traffic count. Both of these results accumulated together supported this hypothesis in some terms. For instance; through the traffic count we can see that there are an immense number of vehicles cars arriving into the city during mornings and a vast amount of vehicles leaving the city at lunch-time and in the afternoon. ...read more.

The red route is a marked off area where any means of stopping is prohibited. Although this system has been installed it is not working effectively, as one news article suggests, "Traffic wardens patrolling Birmingham's controversial Stratford Road red route issued almost 7,000 parking tickets in just 10 months, generating about �400,000 in fines for the city council." That is approximately 24 tickets daily, which clearly shows that the red route is not being applied well or is just not being followed by the general public. One way in which I think will reduce this number is by the government raising the penalty. This will keep the drivers aware of what they are getting into and will make them think twice before thinking about breaking this law again. Another solution that has been tried out by the government is "bus lanes". Bus lanes are lanes that are restricted to only buses, although in some cases taxis and cyclists may use this lane as well. The usage of this lane is to allow traffic to flow more fluently, hence reducing traffic congestion as buses are a large vehicle and take up a lot of room, however carry vast amount of people. In terms of bus advantages, the bus lane allows there to be less or no delays in the buses, therefore no hold ups on the routes which could potentially cause traffic congestion. Although these bus lanes have been created, one must question the efficiency of this use of transport and if it is worth spending additional government funds on the scheme. ...read more.

lanes. This particular lane is especially for those vehicles with normally 2/3 + passengers. As HOV lanes only cater for 2/3+ passengers this will encourage those travelling alone to start to travel alongside colleagues, and by doing so this will increase the amount that car share, hence taking more cars of the road, and people start to travel effectively, for example not travelling alone in a five-seated car, rather travelling with three or four members of the workforce. This system is used mainly in the United States and it has proven that many people use dummies to deceive the cameras to think it is a person when however it is really a driver trying to take the benefits of the HOV lane. If these criminals where to be caught a serious fine would be put on their head. In my opinion this method of reducing traffic congestion should be introduced on the main roads that lead into Birmingham. My perception on the problem of traffic congestion is that it is possible to be reduced; however the local authorities must be willing to spend vast amounts if they intend to resolve this situation. As expected not one solution individually will put congestion into termination; it requires a number of methods being introduced and the existing ones to be improved on. Another aspect that the council need to brush up on is their advertising of car sharing. This scheme has been put in place and in my eyes it has potential to be very successful, however the council need to publicise it more alongside other congestion cutting schemes. ?? ?? ?? ?? Omar Chaudhry 11MWE Mr Taylor Conclusion ...read more.