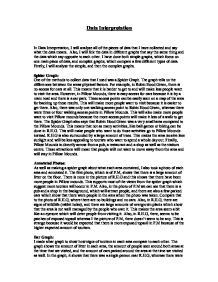 Data Interpretation In Data Interpretation, I will analyse all of the pieces of data that I have collected and say what the data means. Also, I will link the data in different graphs that say the same thing and the data which say opposite to each other. I have done both simple graphs, which focus on one main piece of data, and complex graphs, which compare a few different types of data. Firstly, I will analyse the simple, and then the complex graphs. Spider Graph: One of the methods to collect data that I used was a Spider Graph. The graph tells us the differences between the areas physical factors. For example, in Robin Hood Green, there is no access for cars at all. This means that it is harder to get to and will make less people want to visit the area. However, in Pillow Mounds, there is easy access for cars because it is by a main road and there is a car park. These access points can be easily seen on a map of the area for backing up these results. This will make more people want to visit because it is easier to get there. Also, there was only one walking access point to Robin Hood Green, whereas there were three or four walking access points in Pillow Mounds. This will also make more people want to visit Pillow mounds because the more access points will make it less of a walk to get there. ...read more.

Percentage Chart The final graph that I have made is a complex vegetation percentage graph. This graph shows the percentage of all types of plant and vegetation that I found in the areas. This ranges from grass to baby trees to rabbit poo. It was found that in Pillow Mounds, there was exposed topsoil in all of the spots that were visited. This was even as much as 65% and 61% in two of the areas. There was only exposed topsoil in 3 spots in R.H.G. This tells us the same as all graphs that talked about how much the ground had been walked on each area. And that is that more people have been in the Pillow Mounds and have eroded the ground by walking over it. The survey also shows that there is no rabbit poo in Pillow Mounds, whereas there is some in half of the areas in R.H.G. This shows that there has been more wildlife in R.H.G and that means it is less disturbed by people who would scare away the rabbits. This means more people will have visited Pillow Mounds. Overall, from these results, it shows that more people have probably visited Pillow Mounds than visited Robin Hood Green. This is because there it had a better environmental quality survey result, has more access points, has been more trampled than Robin Hood Green and has more litter. All of these either mean that there have been more tourists recently or are reasons for the tourists to go there in the first place. This makes me think that Pillow Mounds is more popular. ...read more.