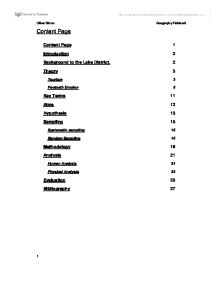 Geography Fieldwork - The effects of Tourism in Keswick

Content Page Content Page 1 Introduction 3 Background to the Lake District. 4 Theory 5 Tourism 5 Footpath Erosion 6 Key Terms 12 Aims 13 Hypothesis 14 Sampling 15 Systematic sampling 16 Random Sampling 16 Methodology 16 Analysis 22 Human Analysis 22 Physical Analysis 24 Evaluation 26 Bibliography 27 Introduction The Lake District is a rural area in North West England; it is located in the county of Cumbria. Refer to the maps for further location information. The areas of the Lake District we are focusing on are the town of Keswick and the walk up to the peak of Cat Bells Background to the Lake District. * The size of the national park is 2,292Km2 * It has a population of 42,239. * It became a national park in 1951. There are many types of rock in the Lake District according to wikipedia some of the rocks date back '500 million years' and include limestone, sandstones, siltstones, mudstones and slate. The Lake District has one of the dampest climates in England. According to wikipedia the average annual precipitation is over '2000mm', this is mainly due to the relief and northerly position. The Mean temperature ranges from '3 �C in January to around 15 �C in July' says wikipedia this is relatively high for it's latitude for example when compared to Moscow which has the same latitude, ranges from -10�C to 19�C. In Fact The Lake District is one of the rainiest areas in England, in 2005 there was extreme flooding in Keswick. Theory In this section I will discuss several theories, which the National park authorities have to take into consideration when making new policies Tourism Tourism along with mining and farming are the three highest earning industries in the Lake District. Tourism has a major affect the local and regional economy. Tourism in the Lake District only became popular in the late 18th century, with the invention of cars and trains meaning more people could travel, as well as more people becoming wealthy and since then has grown to the lake districts highest earner. ...read more.

to the distance from the CBD this also shows what I would have expected which is that the further you get from the centre the more worse the environment, this is because no tourists visit these areas and the councils think that it is better to maintain the touristy areas hence attracting more tourists and more money. There were also things that went wrong. Firstly I could go on about the whether which caused me to have to miss out several points in Keswick and also may have caused some anomalies in both Cat Bells and Keswick. Although my data was accurate and in some cases I got almost perfect coloration. There were a few instances where the data did not prove my case firstly in the pedestrian count although it successfully produced a scatter graph when I tried to put it into spearman's rank I got quite a low score of around 0.3, when you compare this to the rank for traffic count which I got 0.72 it seems that the data must have some anomaly in it. I have come to the conclusion that this anomaly must have been caused by the adverse whether conditions, meaning there were less people walking and more people in shops or driving. Also because the weather was changeable at one pedestrian count it could be pouring down with rain meaning people were taking refuge in shops and some times it could be perfectly dry meaning people were walking. This is likely to have caused us not to get the result we would have liked. If I were to redo the project I would attempt to attain more accuracy by repeat tests over several days, at completely random times, I would try and do each reading 5 times so that I could get an idea of the standard deviation and find the anomalies, getting a more accurate average. In Cat Bells I would also retake reading however I think this is only necessary to do 3 times. ...read more.