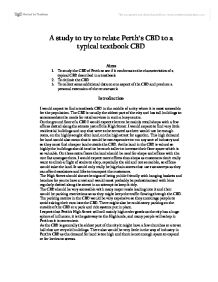 A study to try to relate Perth's CBD to a typical textbook CBD Aims 1. To study the CBD of Perth to see if it conforms to the characteristics of a typical CBD described in a textbook 2. To delimit the CBD 3. To collect some additional data on one aspect of the CBD and produce a personal extension of the coursework Introduction I would expect to find a textbook CBD in the middle of a city where it is most accessible for the population. The CBD is usually the oldest part of the city and has tall buildings to accommodate the needs for retail services in such a busy centre. On the ground floor of a CBD I would expect there to be mainly retail shops with a few offices dotted along the streets just off the High Street. I would expect to find very little residential buildings and any that were to be terraced as there would not be enough room, on the highly sought after land, on the high street for a garden. This high demand for land would also mean that it would be too expensive to run any sort of industry and so they must find cheaper land outside the CBD. As the land in the CBD is valued so highly the buildings should tend to be much taller to increase their floor space which is so valuable. On these extra floors the land should be used for shops and offices with the rare flat amongst them. I would expect more offices than shops as customers don't really want to climb a flight of stairs to shop, especially the old and not so mobile, so offices would take the land. It would only really be big chain stores that use two storeys as they can afford escalators and lifts to transport the customers. The High Street should show the signs of being public friendly with hanging baskets and benches for you to have a rest and would most probably be pedestrianised with bins regularly dotted along the street in an attempt to keep it tidy. ...read more.

Explanation: The reason we found that a large proportion of the suburban areas were residential was because there is more space in the outskirts of the city and so the land is not valued so highly so one can afford to build a house in these areas. There were also some shops in the suburbs which would have only really been convenience stoes selling bread, newspapers and other everyday products that you wouldn't necessarily go to town for. There was also some industry a bit closer to the CBD which would need lots of cheap land to make a profit and accommodate their needs. As we entered the CBD there were many shops this is where much of the retail business in the city would happen and where the public would be attracted to spend there money. This was reflected in the high percentage of land being used for retail (72%). This may not have as high as some other bigger cities as Perth is a relatively small city. There was a freakish result for the amount of residential and open space; both were 16% of the land use. This is very peculiar as you would expect there to be much less open space and no residential as the land in the CBD is very expensive and valued very highly as so many people go there to shop. Conclusion: I expected the pie chat I drew up for the CBD to be dominated by retail, however, over a quarter of the pie chart was made up by open space and residential housing. This surprised me and doesn't conform to a typical textbook CBD. First floor land use: Results: The vast majority of the first floor land use was residential. In the suburban areas, there was some open space(6%) but a huge 91% of the land use taken up by residential means. Progressing towards the CBD the amount of residential land use was maintained at a high percentage, and where the occasional open space was before there are now offices and shops. ...read more.

There was a gradual increase at the start from the west side of the city reaching a peak in the High Street near the under-cover shopping centre and then sharply declined as the came to the east side, next to the river. Explanation: In the High Street there are a lot of large shops selling high order goods so the sphere of influence is big for these shops. This sphere of influence means that people come from all over Scotland to shop in Perth and so there were a lot of people on the High Street. However, we did the data collection at 5:00pm so there would have been more people leaving the High Street as they had finished their shopping and heading to their cars which would have mainly been situated on the west of the CBD as this is where the majority of the car parks are in Perth. This shows why there was such a gentle curve on the left of the distance decay diagram and why the contours were larger on the left side of the map. After the peak in the High Street there was a steep downwards curve from then on as on the east side of the CBD is the river which marks almost the end of the CBD. There aren't many services on this side of the CBD and it is mainly offices with few parking spaces meaning there weren't as many people shopping or going to their cars causing a dramatic fall in the diagram. Conclusion: The results showed quite clearly where the busiest parts of the CBD were and how the people were spread among the suspected CBD. However, there was a big difference to the number of people on the High Street compared to any other street which does not agree to the textbook CBD. This may have been because Perth is a small city and only has one main street ...read more.