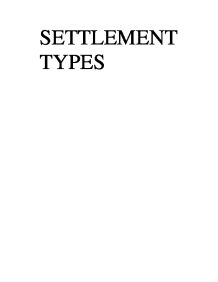 SETTLEMENT TYPES What is a settlement? A settlement is a place where people live. Settlements come in lots of different sizes. A settlement may be as small as a single house in a remote area or as a large as a mega city (a city with over 10 million residents). A settlement may be permanent or temporary. An example of a temporary settlement would be a refugee camp. However, a temporary settlement may become permanent over time. This has happened to many refugee camps that have been built in conflict zones. The reasons why a settlement developed or was built can be thought of as its function. For example, the settlement of Southampton is a port. Settlement shape As well as coming in a variety of sizes, settlements also come in a variety of shapes. * Settlements usually develop in a particular pattern (but not always). * A nucleated settlement is where the buildings are clustered around a central point, e.g. a bridge or market square. * A linear settlement is where the buildings are arranged in a line - usually along a river or road. * A dispersed settlement is where the buildings are spread out or scattered. Dispersed settlements are often found in remote, sparsely-populated areas. Over the past 100 years many new settlements have been planned and developed by the UK government - for example, the town of Harlow in Essex. New towns like this follow distinctive patterns, with their shape often influenced by decisions made by planners. Maps can tell us a lot about the shape of a settlement and also the reasons why a settlement has developed in a certain way. When using a map, look for evidence of natural features such as rivers as well as human features such as historical buildings (e.g. castles or cathedrals). Remember to quote grid references when using map evidence in an exam. ...read more.

This is called urban sprawl. * In the UK, green belts are used to protect areas of countryside from urban sprawl. A green belt is an area of green land around a large city where development is restricted. * Some people are moving out of the city altogether and relocating in rural areas. The movement of people from urban areas to the countryside is called counter-urbanisation. Suburbs of London, UK (left) and of Istanbul, Turkey As well as the movement of people out of urban areas, businesses and services have also moved: * For example, out-of-town shopping centres, such as the Trafford Centre near Manchester, have been built on the edge of the city close to motorway connections. * Retail parks have also developed on the edge of large urban areas. These provide a range of shops and entertainment services (e.g. multi-screen cinemas) in one location. * Business parks and science parks are also a feature of the rural-urban fringe. Areas such as the Cambridge Science Park offer high skilled jobs in a spacious, semi rural setting that is well connected to major road and rail routes. This can be an attractive pull factor for potential employees. Many people are concerned about the impact of relocating shopping and employment to the edge of the city. This trend could lead to greater traffic congestion, pollution from cars and the decline of the CBD. Transport congestion As more people move to the edge of towns and cities, traffic congestion may get worse. This is because many people try to drive their cars each day into the city centre for work. Traffic congestion is made worse by the fact that the roads in the centre of urban areas are old and narrow. People are brought into city on large roads or motorways. These roads then link up with smaller, older, narrower roads in the city centre. This causes bottlenecks and congestion. ...read more.