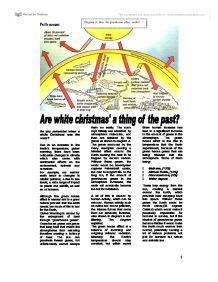 Do you remember when a white Christmas was the norm? Due to an increase in the Earth's temperature; global warming, there have been noticeable changes in climate which also come with detrimental effects on the environment, animals and ourselves. For example, our warmer earth leads to changes in rainfall patterns, a rise in sea levels, a wide range of impact on plants and wildlife, as well as us humans. Although the green house effect is needed and is a good natural process that the earth needs; too much of this is bad for the Earth, Global Warming is caused by the entrapment of heat through "greenhouse gases". Greenhouse gases are gases that keep heat that enters the atmospheres from returning therefore creating a build-up of heat. The sun can penetrate theses gases, but unfortunately cannot escape them so easily. The sun's rays initially are absorbed by atmosphere molecules, and then are detained by the gases as shown in diagram A. The gases produced by the many examples causing a blanket effect around the Earth causing the heat to be trapped by excess carbon. Without these gases, the world would be seventy-two degrees Fahrenheit cooler, too cold to support life. In the long run, if the amount of greenhouse gases in the atmosphere increases, the earth will eventually become too hot for habitation. A lot of this is caused by human activity, which can be reduced. Human activity such as noise and sound pollution, the intense fumes that come from car exhausts, factories, also shown in diagram A and littering. The diagram explains: The green house effect is a balance of incoming and outgoing infrared radiation. Meaning the Earth's temperature should stay constant, but within recent times human increase has lead to a significant increase In the amount of gases in the atmosphere. The green house effect is the rise in temperature that the Earth experiences, because of the green house gases that are being released into the atmosphere. ...read more.

for the sellers of the items but in the long run this means higher electricity bills in the long hot summers to come. Flooding- This could also become an issue weather it is hot or not. The hot weather brings forward the risks of potential flooding for many parts of London. London is exposed to far greater potential damage from flooding than any other urban area in the UK; this is due to the value of resources and the fact that a high proportion of London lies within the floodplain of the river Thames and its tributaries. London will experience even more of a water deficit. Areas prone to flooding already, such as Boscastle. Will suffer severely as the extreme weather tumbles down the town. Hotter weather? - With the climate changing and the temperatures increasing you would assume this means less bitter rainy days indoors. Your wrong! There will be more frequent intense winter rainfalls, which will increase the likelihood of flooding, as I stated before, as well as flash floods. With this abnormal water, the sea levels will also increase which will require more closures of the Thames barrier. This freak weather for the UK will bring a significant increase in storms and the pressure within them. Yet another negative fact about the increased heat; water resources, there will be a bigger water demand whilst in these dry hot summers, less summer rains will reduce soil moisture and therefore will have the chance to replenish groundwater supplies. Health- This is a very important factor, which could be disrupted. As higher levels of mortality are expected, related to summer heat and stress. Furthermore, air quality poses health problems too, mainly for asthmatics as well as causing damage to plants and buildings too. Over the long term there is likely to be an increase in the spread of disease such as Malaria, which could reach parts of the UK. ...read more.

Plants and cops need specific temperatures and weathers in order to grow. These hotter temperatures might show that some of the crops and plants that are well known to the UK will become unable to grown here anymore. Maize, vines, oranges, figs and peaches. It's likely that some plants and crops will become virtually impossible to grow in these southern England conditions. Higher yields of potatoes, sugar, beat, and outdoor tomatoes. And the overall area, as well as yields of cereals will increase. Farmers in southern England have taken advantage of the hotter summers and springs, and have started growing plants that are normally grown in much hotter climates. The temperature has to be above seven degrees Celsius for growing season to begin. Many farmers are hoping to grow the "forgotten fruit". British fruits such as quinces and mulberries. There has already been some success in growing these hotter climate fruits as southeastern Kent has managed to grow apricots, which have failed to grow in previous years. As well as the apricot fruit the kiwi fruit is being encouraged to grow across southern England, which currently grows in South America and Africa. In turn of the fruit and plants we are gaining from this climate change there is also fruits that will be lost, as the temperatures will get to high for certain plants to grow. The first example of this; we have ditched the marrow in favour of the sun-loving squash. These warmer conditions are also affecting traditional fruit trees such as apple, pear and plum. Lastly, it is not just crops that will be affected, different species of animals too, from my research it shows that dramatic changes that will put wildlife along Britain's 9,040 miles of coastline. The arrival of Basking sharks in Britain's waters and also the little egret and Glanville fritillary butterfly are set to thrive as the climate becomes warmer in the UK. There are also species, which will be taken in turn of these new additions but not so much from the UK, likely to be the polar ice caps. Faith cooper 1 ...read more.