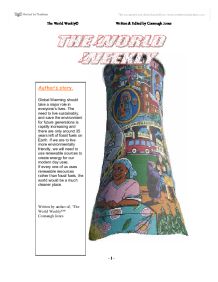 There's no question that the Earth is getting hotter-and fast, but the real questions are: How much of the warming is our fault, and are we willing to slow the meltdown by cutting down on our massive usage of fossil fuels? Nobody can tell if global warming is entirely our fault, but they can prove that we are certainly adding excess amounts of greenhouse gases, which is causing the process to speed up rapidly. If we were to cut out most of our usage with fossil fuels and turn them to renewable resources, the whole process wouldn't be half as problematic. Obviously, everyone has their own opinions, and people such as industrialists, believe global warming is entirely natural. One factory owner told us that, "Scientists have dismissed claims that we can halt global warming by drastically cutting down our consumption of fossil fuels. New evidence has shown that the main cause of global warming is in fact the sun. The temperature rise recently blamed on fossil fuels, is mainly due to an increase in the sun's energy output... An increase of just 0.2% in solar output has the same effect as doubling the amount of carbon dioxide in the atmosphere." Although this could be true, as we are emitting more carbon dioxide, sulphur dioxide etc. the extra heat from the sun would not be able to penetrate the added amounts of greenhouse gases, which will lead to the earth's surface warming up. The picture on the left shows the Earth when the greenhouse effect hasn't 'gone wild'. The heat hits the Earth and some is absorbed, but the majority reflects out of the atmosphere and in to space. The picture on the right shows the Earth when our greenhouse gases have been emitted. Most of the radiated heat gets either absorbed by the water on Earth, or it bounces off Earth's surface, but is trapped in the thickened atmosphere. ...read more.

This tells us that during the industrial revolution, not nearly as much CO2 was being produced as there is now. All this pollution still isn't half as bad as what is going on in Britain today. If we keep it going at this rate, who knows what earth will be like in another 1000 years! All The Talk About Slowing Down Global Warming, But How? There are many ways to live sustainably, from using renewable resources, to turning your heating down 2�c. Here are a few clean, renewable ways to live. On the other hand, there are some negative points. Source + Sides - Sides Wind Power Easy to build..Easy to convert Causes fatigue and head to electricity..Cheap. aches..Loud. Tidal Power Tide comes twice a day.. Expensive.. Hard for Electricity to get from Water to land. Solar Power Sun gives off lots of energy.. Earth only facing sun for Easy to catch the energy.. 12 hrs a day..Sometimes Cheap. Cloudy. As you can see, although there are many positive sides to renewable resources, there are many negative points. Although these are possible ideas for slowing global warming, there are many simpler ways such as stopping deforestation or slowing down on the amount of greenhouse gases we are emitting. Problems with Deforestation There is nothing wrong with deforestation, as long as we replace the trees that we cut down. That's the problem. Many people make a living from deforestation, by either using the pulp to produce paper, or using the rare wood for furniture etc. They don't care about the environment, they just want income. Millions of different species are becoming endangered and even extinct through the loss of their habitats in the rainforests every year. Another problem is that when you cut down trees, and don't replant them, they are not able to absorb the CO2 in the air, and this leads to excess carbon dioxide getting trapped in the earth's atmosphere. ...read more.

Global warming has been put 'into reverse' but will soon begin to rise again, when a warming over the Pacific Ocean will come across, and cause the temperature to once again rise. This means that even though global warming has slowed down, this year it will still have risen in the last 30 years by a large amount. Michel Jarraud also agrees that global warming is definitely happening. "La Nina is part of what we call 'variability'. There has always been and there will always be cooler and warmer years, but what is important for climate change is that the trend is up." So don't take this as to say global warming isn't happening, because it most probably is. Still make all the difference you can, by recycling waste products, and planting a tree etc. La Nina El Nino Although there is all the evidence of the earth rapidly warming up, and the sea levels rising, there are actually many good points for global warming! * Warmer weather on Britain's coasts could attract many tourists from around the world and bring much more money to the country. * More chance for the grass to grow in farmer's fields, giving the cows and sheep etc. more chance to produce milk. * There is more chance for children and teenagers to play outside, instead of them being in the house watching television. * Any future ice ages, which could wipe out mankind, would be stopped by the warmer weather. * Cold winters have killed more people than warm summers, so having a warmer summer is much better. * Longer growing seasons for arable farmers which would help them grow wheat and maize for a longer period of time in the summer. * You would save lots of money on heating bills. * Sea gets warmer, and more tropical marine life would come to the usually cold parts of the world. The World Weekly(c) Written & Edited by Connaugh Jones - 1 - ...read more.