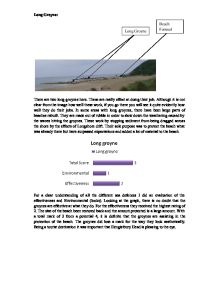 Long Groyne: There are two long groynes here. These are really effect at doing their job. Although it is not clear from the image how well these work, if you go there you will see it quite evidently how well they do their jobs. In some areas with long groynes, there have been large parts of beaches rebuilt. They are made out of rubble in order to slow down the weathering caused by the waves hitting the groynes. These work by stopping sediment from being dragged across the shore by the effects of Longshore drift. Their sole purpose was to protect the beach what was already there but have surpassed expectations and added a lot of material to the beach. For a clear understanding of all the different sea defences I did an evaluation of the effectiveness and Environmental (looks). Looking at the graph, there is no doubt that the groynes are effective at what they do. For the effectiveness they received the highest rating of 2. The size of the beach been restored back and the amount protected is a large amount. With a total mark of 3 from a potential 4, it is definite that the groynes are assisting in the protection of the beach. The groynes did lose a mark for the way they look aesthetically. Being a tourist destination it was important that Hengistbury Head is pleasing to the eye. 200m Gabion: At the top, there is an image of the 200m Gabion which has been built at the South Cliff. The result of placing the Gabion here is not clearly seen but an explanation will be given. The Gabion at Hengistbury Head is a long cage which has been put in place to hold back the rocks that have been filled behind them. Also the cages absorb the force of the waves and hold back the material behind them. ...read more.

Overall the causeway was a total waste of time, effort and money that could have been used for other ways of protecting Hengistbury Head. Drainage Weir: At the top you can see an image of the drainage weir present at East Cliff. The drainage weir looks like a waterfall. It is man-made and fulfils an important purpose. The purpose of the drainage weir is to drain out and down all the water (more specifically rain water) from the cliff to prevent it from becoming to saturated. If it ever does get over saturated the outcome could be major slumping. In this image you can see the drainage weir working at optimum. This is because the day we went, it was raining quite heavily. Vegetation grows very well next to the drainage weir due to the large amount of fresh water that flows from the top. Marram grass grows very well around it. The Marram grass also helps since it holds the sand together and stops it from eroding and falling. Looking at how effective it is in the weather this picture was taken in, it shows how effective it is. The bar graph here shows that it is as effective as the sand dunes. It has also scored a 4 out of a possible four. The effectiveness is unquestionable as you can see in the above image. The sheer amount of water flowing down from the top shows its effectiveness. Without it, there would definitely be a problem with slumping. It also got top scores for environmental since it does look very good. Being a man-made object, it perfectly fits the environment and at the same time fulfils its purpose. Gabion Cages: At the top you can see an image of the gabion cages present at the East Cliff. If you look clearly at the image, you can see some sand at the bottom of the causeway. ...read more.

It balances the amount of sand on the beach because the areas of the beach are unlikely to lose similar amounts of sand. By replacing the sand from the worst affected area it makes the beach look more pleasing to the eye. A problem with this method is that the sand needs to be continually replaced since the sand naturally on the beach erodes away slower than the sand that has been artificially added. At the top you can see an image of the graph with the evaluation of Beach Nourishment. Beach Nourishment has also been awarded the top score with a four out of four. The Beach Nourishment is definitely an effective way of dealing with the wave's strong backwash. It allows the artificially added waves to be carried out the beach rather than the natural sands. And for Environmental, it deserved a two because it just replaces what needs to be there. It makes the beach look more complete. The only environmental effect it has on the beach is to improve it. Groynes: The various groynes seen in the satellite image below can be found at Mudeford spit. Looking at the image below you can see just how effective these groynes really are. They are doing a fantastic job of stopping the sediment in the waves from moving down the beach. The sediment is being carried down the beach by nothing more then long shore drift. Although long shore drift created Mudeford spit it could also destroy it or make it so big that the harbour becomes closed. For these reasons these groynes have had to be put in place. Looking at the bar graph above overall the groynes have done very well with an overall score of 3 out of 4. Environmentally on Mudeford spit because it is so crowded by beach huts I do not think that the vast amount of groynes effects the natural appearance of Mudeford spit. Nothing short of perfect describes the effectiveness of these groynes it is truly amazing how much sediment they have trapped over the years. ...read more.