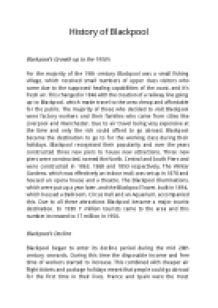 History of Blackpool - growth and decline.

Transfer-Encoding: chunked ﻿History of Blackpool Blackpool?s Growth up to the 1950?s For the majority of the 19th century Blackpool was a small fishing village, which received small numbers of upper class visitors who came due to the supposed healing capabilities of the coast, and it's fresh air. This changed in 1846 with the creation of a railway line going up to Blackpool, which made travel to the area cheap and affordable for the public. The majority of those who decided to visit Blackpool were factory workers and their families who came from cities like Liverpool and Manchester. Due to air travel being very expensive at the time and only the rich could afford to go abroad. ...read more.

The Blackpool Illuminations, which were put up a year later, and the Blackpool Tower, built in 1894, which housed a Ballroom, Circus Hall and an Aquarium, accompanied this. Due to all these attractions Blackpool became a major tourist destination. In 1930 7 million tourists came to the area and this number increased to 17 million in 1950. Blackpool?s Decline Blackpool began to enter its decline period during the mid 20th century onwards. During this time the disposable income and free time of workers started to increase. This combined with cheaper air flight tickets and package holidays meant that people could go abroad for the first time in their lives. ...read more.

The new crowds attracted by Blackpool were seen as antisocial and unpleasant and removed the family friendly nature associated with Blackpool. The loss of families as potential tourists was a major blow to Blackpool and further added to its decline. Blackpool’s Rejuvenation Recently Blackpool has made attempts to restore its status as a popular tourist destination. Winter Gardens was bought from its private owners and brought back into the public market and a contract with Merlin was made to include the Blackpool Tower with its other hosts of amusement parks. Additionally £300 million was spent in improving the state of Blackpool's infrastructure. While the effort is helping Blackpool it isn't increasing its status as a tourist destination. Instead of entering Rejuvenation Blackpool has entered a state of slowed decline. ...read more.