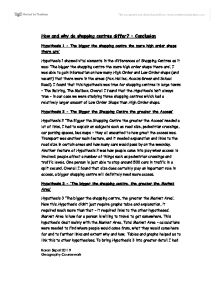 How and why do shopping centres differ?

How and why do shopping centres differ? – Conclusion

Hypothesis 1 showed vital elements in the differences of Shopping Centres as it was: ‘The bigger the shopping centre the more high order shops there are’. I was able to gain information on how many High Order and Low Order shops (and vacant) that there were in the areas (Fox Hollies, Acocks Green and School Road). I found that this hypothesis was true for shopping centres in large towns – The Bullring, The Mailbox. Overall I found that the Hypothesis isn’t always true – in our case we were studying three shopping centres which had a relatively larger amount of Low Order Shops than High Order shops.

Hypothesis 2 - The Bigger the Shopping Centre the greater the Access’

Hypothesis 2 ‘The Bigger the Shopping Centre the greater the Access’ needed a lot of links, I had to explain on subjects such as road size, pedestrian crossings, car parking spaces, bus maps – they all amounted to how great the access was. Transport was another main feature, and it needed explanation and links to the road size in certain areas and how many cars would pass by on the weekday. Another feature of Hypothesis 2 was how people come into play when access is involved; people affect a number of things such as pedestrian crossings and traffic levels. One person is just able to stop around 500 cars in traffic in a split second. Overall I found that size does certainly play an important role in access, a bigger shopping centre will definitely need more access.

Hypothesis 3 - ‘The bigger the shopping centre, the greater the Market Area’

Hypothesis 3 ‘The bigger the shopping centre, the greater the Market Area’. Now this Hypothesis didn’t just require graphs table and explanation, it required much more than that – it required links to the other hypotheses’. Market Area is how far a person is willing to travel to get somewhere. This hypothesis dealt mainly with the Market Area, Total Market Area – calculations were needed to find where people would come from, what they would come here for and to further links and extent why and how. Tables and graphs helped us to link this to other hypothesises. To bring Hypothesis 3 into greater detail I had to test the Market Areas to find out their similarities and differences, the best testing solution was predicting the effects of testing on the weekend. I needed to use the distance ranges to find how people would get there, according to my results– walking was the most frequent method for those who lived nearby). The conclusion that I came to was that Shopping Centres that are bigger are more likely to have a bigger Majority of Market Area.

The single most important difference over all of the hypotheses’ was the time span that all of the data was recorded over. Over several months fairly large Companies such as Woolworths have closed down. The same thing could have happened to many other stores over these few months. A business needs several things to be successful – a great Market Area is the best possible way to sum up everything that businesses need.

I think that my data was fairly accurate; the questionnaires were taken on a weekday. The best results would have been generated if the questionnaire had been conducted on a weekend. This would be because the weekend is the time where most people come to shop; access of buses and trains usually has an increase. The biggest change would be the extension of Market Area – more people would visit a shopping centre.

The Transport results were quite expected as so many people travelled to the Shopping Centres from short distances, as the distance became further less people started travelling on the weekdays. Walking would be high because of short distances, but the need of access to travel from further distances is reasonable.

If I was to do this Hypothesis over again I would not change much as I found great results. The Market Area is one thing that I would change, and I would change it by extending the distances. The weekend questionnaire would be the biggest difference – especially to the Market Area as figures would most likely double.

I believe that I have been successful in finding of why shopping centres differ, and how they differ.