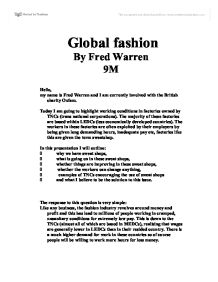 Global fashion By Fred Warren 9M Hello, my name is Fred Warren and I am currently involved with the British charity Oxfam. Today I am going to highlight working conditions in factories owned by TNCs (trans national corporations). The majority of these factories are based within LEDCs (less economically developed countries). The workers in these factories are often exploited by their employers by being given long demanding hours, inadequate pay etc, factories like this are given the term sweatshop. In this presentation I will outline: ? why we have sweat shops, ? what is going on in these sweat shops, ? whether things are improving in these sweat shops, ? whether the workers can change anything, ? examples of TNCs encouraging the use of sweat shops ? and what I believe to be the solution to this issue. The response to this question is very simple: Like any business, the fashion industry revolves around money and profit and this has lead to millions of people working in cramped, unsanitary conditions for extremely low pay. This is down to the TNCs (almost all of which are based in MEDCs), realising that wages are generally lower in LEDCs than in their resided country. ...read more.

Despite all the startling statistics regarding sweatshops, people are saying that standards are improving thanks to pressure from governments and companies such as Wal-Mart who claim to do more audits than any other company--13,600 reviews of 7,200 factories last year alone. They have also permanently banned 141 factories in 2005 as a result of serious infractions, such as using child labour. Some factories are now receiving almost daily visits from inspection teams who demand pay roll and production records, facility tours and interviews with managers and workers. However, these positive facts may just be down to factories getting better at concealing abuses. Internal industry documents reviewed by Business Week have revealed that numerous Chinese factories actually keep double sets of books to fool auditors and distribute scripts for employees to recite if they are questioned. The percentage of Chinese suppliers caught submitting false pay roll records has risen from 46% to 75% over the last four years; this does not show that things are getting better but implies the reverse. The blame for this will probably fall on the factory owner, however, if the factory is being set targets by the TNC which cannot be achieved whilst abiding by the TNCs rules (without any profit) ...read more.

This sadly, is not true as they been shown to be using child labour in slum workshops in India for wages as low as 60p an hour. However, sweatshops are not confined to places like India and China. It has recently been discovered Primark are running factories in the UK, forcing 12 hour days and pay as little as �3.50 an hour! This suggests that is also a huge demand for jobs in the UK as people are willing to work under such poor conditions. .. My own opinion My opinion of how to end the use of sweat shops by TNCs is to just, simply, continue to raise public awareness of the issue. If people know some of these startling facts then some of them will stop buying clothes produced in un ethical conditions, if this grows to a large scale then companies will be forced to change their habits (this has already worked to a certain extent). An example of how this has fully worked is the fair trade mark on food products which tells consumers that the food they are buying was ethically produced. Though, this theory may not be so effective in the short term as the current economic recession has made people think of themselves and their own money more so they might be tempted to go for a cheaper product, even if has been un ethically produced. The End ...read more.