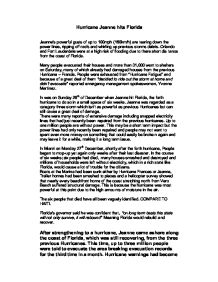 Jeanne’s powerful gusts of up to 100mph (160km/h) are tearing down the power lines, ripping off roofs and whirling up previous storms debris. Orlando and Fort Lauderdale were at a high risk of flooding due to there short distance from the coast of Florida.

Many people evacuated their houses and more than 31,000 went to shelters on Saturday, many of which already had damaged houses from the previous Hurricane – Francis. People were exhausted from “Hurricane Fatigue” and because of a great deal of them “decided to ride out the storm at home and didn’t evacuate” reported emergency management spokeswoman, Yvonne Martinez.

In was on Sunday 26th of December when Jeanne hit Florida, the forth hurricane to do so in a small space of six weeks. Jeanne was regarded as a category three storm which isn’t as powerful as previous Hurricanes but can still cause a great deal of damage.

There were many reports of extensive damage including snapped electricity lines that had just recently been repaired from the previous hurricanes. Up to one million people are without power. This may be a short term impact but the power lines had only recently been repaired and people may not want to spent even more money on something that could easily be broken again and may leave it for a while, making it a long term issue.

In Miami on Monday 27th December, shortly after the forth hurricane, People began to mop-up yet again only weeks after their last disaster. In the course of six weeks; six people had died, many houses smashed and destroyed and millions of households were left without electricity, which in a rich state like Florida, would cause a lot of trouble for the citizens.

Boats at the Marina had been sunk either by Hurricane Frances or Jeanne, Trailer homes had been smashed to pieces and a helicopter survey showed that nearly every beachfront home of the coast stretching north from Vero Beach suffered structural damage. This is because the hurricane was most powerful at this point due to the high amounts of moisture in the air.

The six people that died have all been vaguely identified. COMPARE TO HAITI.

Florida’s governor said he was confident that, “on long term basis this state will not only survive, it will rebound” Meaning Florida would rebuild and recover.

After strengthening to a hurricane, Jeanne came ashore along the coast of Florida, which was still recovering, from the three previous Hurricanes. This time, up to three million people were told to evacuate the area breaking evacuation records for the third time in a month. Hurricane warnings had become so frequent, that many of the people of Florida, were suffering from “Hurricane Fatigue” (the repeated exposure to a hazard resulting in people beginning to develop a fatalistic attitude, possibly through tiredness and exhaustion.)

Millions of Floridians evacuated their homes whilst others chose to stay put due to the fact that they were sick of the hype over Hurricanes that may not even hit them.

In the west palm beach area there were shelter spots for 27,000 people, but only 11,000 had evacuated by mid-afternoon. COMPARE TO HAITI!

State meteorologist – Ben Nelson, believes that, those earlier storms have complicated the possible problems from Jeanne because the ground is already saturated and many structures have been weakened by wind, rain and storm surge.

The recent hurricanes have ruined the main tourist attractions of Florida, damaging the oceanfront resorts and washing out some of the highways. This may put people off Florida in the future and can result in terrible loss in the tourist industry.

In addition to soil erosion, the deforestation has also caused periodic flooding, as seen on 17 September, 2004. Tropical storm Jeanne skimmed the north coast of Haiti, leaving 3,006 people dead in flooding and mudslides, mostly in the city of Gonaïves.[3] Earlier that year in May, floods killed over 3,000 people on Haiti's southern border with the Dominican Republic. [4]