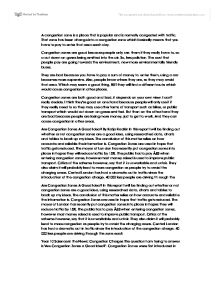 In this report I will be finding out whether or not congestion zones are a good idea, using researched data, charts and tables to back up my ideas.

A congestion zone is a place that is popular and is normally congested with traffic. That zone has been change into a congestion zone which basically means that you have to pay to enter that area each day. Congestion zones are good because people only use them if they really have to, so a cut down on gases being emitted into the air. So, less pollution. The cost that people pay are going towards the environment, new more environmentally friendly buses. They are bad because you have to pay a sum of money to enter them, using a car becomes more expensive. Also, people know where they are, so they may avoid that area. Which may seem a good thing, BUT they will find a different route which would cause congestion in other places. Congestion zones are both good and bad, it depends on your own view. I can't really decide. I think they're good on one hand because people will only use it if they really need to so they may use other forms of transport such as bikes, or public transport which would cut down on gases emitted. But then on the other hand they are bad because people are losing more money, just to get to work. And they can cause congestion in other areas. Are Congestion Zones A Good Idea? By Katja Rackin In this report I will be finding out whether or not congestion zones are a good idea, using researched data, charts and tables to back up my ideas. The conclusion of this matter relies on how accurate and reliable the information is. Congestion Zones are used in hope that traffic gets reduced. ...read more.

This data supports the congestion charges for safer air. One thing that congestion zones are doing as well as the previously mentioned, is reducing the risk of damage to the city. This is because the zones are dropping levels of SO2, which is essentially acid rain. In 2001, there average levels of SO2 were 4.274 in the zones, and the predicted levels for 2010, nine years later, is down to 1.138. This reduces the risk of damage because acid rain has an effect on Limestone (a material that a lot of statues are made out of) where by it almost eats away at it, so the zones because of this. Same with the levels of Benzene- a harmful bi-product of burning fuel. In 2001, the levels were at an average of 1.072, in 2010 the levels have been predicted to be around 0.658. C; Source reliability can make all the difference, which is why I have picked three very reliable sources. My Source one is a report by BBCNEWS. I feel this makes it very reliable. This is because the BBC is a well known and trusted organisation, backed by the government. The Source also includes exclusive interviews for the BBC by the mayor of the time, Ken Livingstone. This report was published on the 17th February 2004. Though this source is a few years old, I think it is still reliable, because the evidence is still valid; also because of the report being published one year after the scheme was put into place, we can see how it is progressing, and compare results to determine its success. ...read more.

How Do They All Link Together? : These three areas all together because, positive or negative, they are all factors and consequences of the congestion charge. Everything Environmental, such as the emissions and pollution, links to the Social element because of things such as public health. The Social element ties to the Economical element because of things such as the taxes and generation of revenue having an effect on the people, just like the Economical links to the Environmental, due to the fact that to reduce pollution takes money. (such as the charge, the cost of green technologies etc) E (conclusion); To conclude, after considering all the evidence for both sides, I think that overall congestion charges are a good idea. That's not to say that it doesn't have its negative points though, because it does. The information that most helped me reach my decision was the data I found, and my source 1, BBCNEWS report. This is because I feel the health of the people will be improving, and you cant really argue with that. Also, the fact that the money is being spent on the public- which I think is a brilliant idea. However, like I have said, the congestion charge does not come without its negative points, such as: people paying a 'double tax' when they have no choice, delays and congestion being created on alternate routes due to drivers trying to avoid the congestion charge area, and also, the fact that some businesses are suffering is something that I find quite unacceptable. So yes, the system does need some tweaking, but overall think it is a good idea that initially solves a problem. I think my conclusion is valid because I have considered all of the evidence and made an educated decision. ...read more.