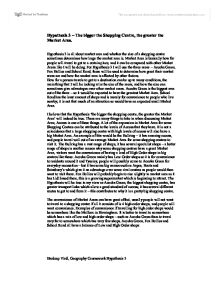 Investigating - 'The bigger the Shopping Centre, the greater the Market Area.'

Hypothesis 3 - The bigger the Shopping Centre, the greater the Market Area. Hypothesis 3 is all about market area and whether the size of a shopping centre sometimes determines how large the market area is. Market Area is basically how far people will travel to get to a certain place, and it can be compared with other Market Areas like I will be doing. For Hypothesis 3 I will use the three areas - Acocks Green, Fox Hollies and School Road, these will be used to determine how great their market areas are and how the market area is affected by other factors. How far a person travels to get to a destination can be up to many conditions, the main thing that I will be looking at is the size of the areas, and how the size can sometimes give advantages over other market areas. Acocks Green is the biggest area out of the three - so it would be expected to have the greatest Market Area. School Road has the least amount of shops and is merely for convenience to people who live nearby; it is not that much of an attraction so would have an expected small Market Area. I believe that the Hypothesis 'the bigger the shopping centre, the greater the Market Area' will indeed be true. There are many things to take in when discussing Market Area; Access is one of these things. A lot of the expansion in Market Area for some Shopping Centres can be attributed to the levels of Access that they have. It is not a coincidence that a large shopping centre with high levels of access will also have a big Market Area. ...read more.

The Majority MA has this effect on how people travel, from the maps and graphs there is the similarity of only a small proportion of people in a majority market area compared to the large scale of Total Market Area. Buses and Cars are the main alternatives here, but are a rarity when it comes to transport to School Road, this is likely because School road doesn't have as many parking spaces as Acocks Green and Fox Hollies, there isn't a big supermarket e.g. Sainsbury's - where people would park their cars if the centre lacks space. Also the School Road shopping centre is small, with a low amount of parking spaces - you wouldn't expect the space for a bus lane - School Road is for convenience to those who live a short distance from it, and it lacks access. Acocks Green and Fox Hollies visitors make the utilization of cars and buses, since walking to Acocks Green and Fox Hollies is the main option, use of the Car is at - 44 for Acocks Green, and 35 for Fox Hollies. Use of the bus is at 52 for Acocks Green, and 27 for Fox Hollies. Acocks green and Fox Hollies have greater access this is why so many use these options of travel. From Travel Tables: 1 and 2 you can see that when we get into the ranges of 3.5km+ that the number of visitors who travel from that particular area starts to decline. People who live in these ranges are the ones who are more likely to take the secondary option of using transport instead of walking because they likely have convenience and/or the distance is far for them. ...read more.

The results that were gathered were found on a weekday, what if they were found on the weekend? During the weekend shopping centres will see a lot of different people travelling from a lot of different places. Employment affects a big part of this - usually when people are working they don't have the chance to travel 10 miles away to go to a shopping centre - at that point in time they will look forward to convenience. Acocks Green is the most likely to have people from a 10km+ range travel to it on the weekend - why? There are more shops in Acocks Green than in the other two shopping centres, would it be very convenient for someone to travel 10km to find 3 shops, no. People will want to travel a certain amount to find a shopping centre which has a large amount of shops, has a mix of high and low order shops - and has big name stores e.g. Argos and Sainsbury's. Acocks Green has all of these attributes, Fox Hollies and School Road would also be expected to have near as many as double the amount of customers that they have on a weekday. The Market Area of any Shopping Centre will always have an adverse effect on a weekend - the usual outcome is more customers, more traffic. If this questionnaire had been taken on the weekend (and the distances had been extended) we would have seen the number of customers rising, and in the further ranges visitors still would have been coming in. The accuracy can be shown varying depending on what time information is taken, but a further range and a bigger majority Market Area could certainly be anticipated from weekend results. ?? ?? ?? ?? Hardeep Virdi, Geography Coursework Hypothesis 3 ...read more.