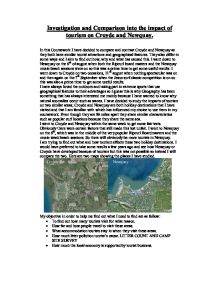 Investigation into the impact of tourism on Croyde and Newquay

Investigation and Comparison into the impact of tourism on Croyde and Newquay. In this Coursework I have decided to compare and contrast Croyde and Newquay as they both have similar tourist attractions and geographical features. They also differ in some ways and I aim to find out how, why and what has caused this. I went down to Newquay on the 6th of august when both the Ripcurl board masters and the Newquay music beach sessions were on so this was a prime time to get some useful results. I went down to Croyde on two occasions, 11th august when nothing spectacular was on and then again on the 7th September when the Jesus surf classic competition is on so this was also a prime time to get some useful results. I have always loved the outdoors and taking part in extreme sports that use geographical features to their advantages so I guess this is why Geography has been something that has always interested me mainly because I have wanted to know why natural anomalies occur such as waves. I have decided to study the impacts of tourism on two similar areas; Croyde and Newquay are both holiday destinations that I have visited and that I am familiar with which has influenced my choice to use them in my coursework. Even though they are 86 miles apart they share similar characteristics such as popular surf locations because they share the same sea. I went to Croyde and Newquay within the same week to get some fair tests. Obviously there were certain factors that still made this test unfair. I went to Newquay on the 6th, which was in the middle of the very popular Ripcurl Boardmasters and the music week beach sessions. So there will obviously be more tourists in Newquay. I am trying to find out what and how tourism effects these two holiday destinations. ...read more.

On the day I will hand out my questionnaire and ask people to take part in my coursework and with the tax disc survey I will go into two or three car parks collecting the locations that people have travelled to reach this destination. Once I have done this I will group all my data into workable format. With the tax disc survey I will work out the carbon footprint of the data I feel applicable. I have done this so I can work out how far the attraction of the effect of tourism has spread. What accommodation tourists stay in when they visit these areas? In the questionnaire I have included the request of information on the tourist's accommodation. This will help me again as the more people who use hotels will suggest the more hotels there are and therefore the demand for them is greater. This will help me because I will be able to know whether the most popular forms of accommodation require more or less litter pollution to the area or whether the owner takes the litter under their responsibility. I will do this again by using the format of my questionnaire, as this will be a strong and effective source. How much litter pollution tourist's cause? In order to get the results I want to answer this objective I will take a litter count by recording the amount of litter I see in a 2m� then I repeat this every 20m and I will also include an Environmental Perception Grid in my questionnaire assuring I get both raw data and people's opinions on the amount of litter in the area. Once I have done this I can then result in concluding what I have established following-onto linking it back to the main aim of this coursework and whether the tourism impact on the two different places was positive or negative. ...read more.

sustainable as Croyde has narrow roads and a small population which would be directly effected if the town were to expand outwards. Newquay however has lent itself to this very well having fairly flat and available land. Newquay has changed this way as there is far more money in the long run for large amounts of tourists and throughout the winter they will still get tourists as they have many hotels 50% of people asked camped in Croyde and few people will want to do this in the winter. I think overall I have tried hard and succeeded in comparing Newquay and Croyde. They differ in many ways and couldn't be more similar in others making them attractive for different reasons. Evaluation Had I been given the chance to do this again I would put in deeper research into the area and mainly extending my questionnaire and asking 100 people as the more people questioned the more reliable my result however this would not need to be a necessity as I effectively took a random sample of many as I randomly asked every other person (that was the only reason I chose them) making them as reliable as possible. I went to croyde when I Ripcurl board masters was on but I firstly went to croyde when nothing was happening so I decided to make this fair by going back to croyde when a surf festival was on. There were many tests I took that had no help to my main aim making them completely invalid and therefore wasting some of my time that I could have spent else where. Hopefully these downfalls in my research haven't affected my outcome too much. I would repeat my results and do them all round the year as in summer obviously I would have more results than the winter I would like to see how the change of year/weather change my results and see whether the public prefer this change and therefore prefer these areas in winter. ...read more.