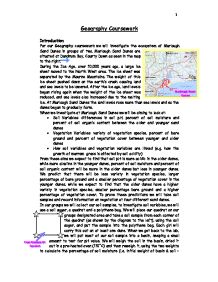 Geography Coursework Introduction For our Geography coursework we will investigate the ecosystem of Murlough Sand Dunes in groups of two. Murlough Sand Dunes are situated at Dundrum Bay, County Down as seen in the map to the right. During the Ice Age, over 10,000 years ago, a large ice sheet moved to the North West area. The ice sheet was separated by the Mourne Mountains. The weight of this ice sheet pushed down on the earth's crush causing land and sea levels to be lowered. After the ice age, land levels began rising again when the weight of the ice sheet was reduced, and sea levels also increased due to the melting ice. At Murlough Sand Dunes the land levels rose more than sea levels and so the dunes began to gradually form. When we investigate at Murlough Sand Dunes we will be aiming to look at: * Soil Variables: differences in soil pH, percent of soil moisture and percent of soil organic content between the older and younger sand dunes * Vegetation Variables: variety of vegetation species, percent of bare ground and percent of vegetation cover between younger and older dunes * How soil variables and vegetation variables are linked (e.g. how the growth of marram grass is affected by soil acidity) From these aims we expect to find that soil pH is more acidic in the older dunes, while more alkaline in the younger dunes, percent of soil moisture and percent of soil organic content will be more in the older dunes but less in younger dunes. We predict that there will be less variety in vegetation species, larger percentage of bare ground and a smaller percentage of vegetation cover in the younger dunes, while we expect to find that the older dunes have a higher variety in vegetation species, smaller percentage bare ground and a higher percentage of vegetation cover. ...read more.

For organic content some results are particularly higher than the average results - they are ambiguous results. This might be because some groups took up parts of the vegetation with their soil sample rather that ensuring vegetation was moved from where the soil auger would take the sample from. The dunes that we took our vegetation and soil samples from were dunes that are protected from human activities, such as walking or jumping on the dune. An example of the line of protection used would be fences around the dunes and a footpath from the car park to the beach. This would mean that the soil and vegetation of the dunes would not have been affected, and so the results would be reliable. There may have been some miscalculations with the percentage of moisture content, as results were very high with some and the decrease, seen in graph 2 between Blocks 3 and 4, was not predicted. However, the relationship between moisture and organic content of soil remains consistent in all 4 Blocks (i.e. when one decreases the other decreases, and when one increases the other increases etc). But this unexpected decrease may be due to microclimates formed by the heather. A microclimate is when a small area receives different weather conditions in parts. For example, in this case the heather would provide shelter from rain and wind etc., so in cold weather it would protect other vegetation and the soil - and in warm weather it would block sunlight from them. So, with these microclimates the soil might not have had as much dead organic matter and so would not have been able to hold as much moisture content as we had expected. (I.e. block 4 did not fulfil our prediction that it would also increase in soil moisture content). ?? ?? ?? ?? 1 ...read more.