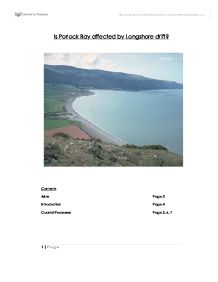 Is Porlock Bay affected by Longshore drift? Contents Aims Page 3 Introduction Page 4 Coastal Processes Page 5, 6, 7 Aims To investigate coastal processes along Porlock Bay, Exmoor National Park. To make a comparison of coastal management schemes inside & outside Exmoor National Park. Introduction As part of our geography coursework project we had to travel to somerset, Nettlecombe on the 9th July 2009. Our study is on coastal processes and management at Porlock Bay. During our stay in Somerset we visited many places, which include Porlock Bay, Hurlstone point and Porlock Weir where. During the weekend we also carried out a study at Minehead to analyse the coastal management. We visited Gore Point which is west of Porlock Bay. Porlock Bay is situated on the west coast of England. The population of porlock bay is 10 000 and is 4.3km wide. The population of minehead is 14 000. Porlock Bay is in the county of Somerset and Bristol is the nearest major city. Porlock bay is a very good place to study as it's a small area with a low population and with lots of coastal processes and management happening within a 4km bay. Somerset is in a national park, this means that the area is protected. The national park is called Exmoor national park. Somerset is a rural county in the UK. ...read more.

Methodology Equipment we used: - Calliper - To measure the diameter of the clast - Powers index card - To class pebble shapes into different categories - 30m tape - To measure the size of the beach - Clinometer - To measure the angle of the facets We arrived at Gore point and we were told to get into groups of 4. Firstly we measured the angle of the facet using the clinometers but we had to calibrate the clinometer. We were told that in order to calibrate the clinometer the shortest person in the group was to use the clinometere to get an accurate measurement. The shortest person had to point the clinometere at the tallest person in the group and point it where ever it read 0 on the clinometere. For example if the clinometere read 0 degrees on the tallest persons forehead, that must be noted and pointed at the persons forehead for every facet which was measured. We then measured the length of the facet using the 30m tape. We recorded all the measurements down. We repeated those steps for every facet in order to create a beach profile. In order to categorize the pebble shapes we got the 30m tape and opened it down the beach starting from the beach to the sea. We picked up a random pebble at every one metre. ...read more.