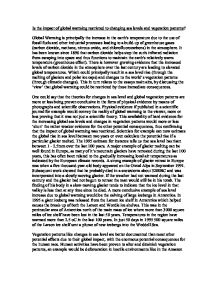 Is the impact of global warming restricted to changing sea levels and vegetation patterns?

Is the impact of global warming restricted to changing sea levels and vegetation patterns? Global Warming is principally the increase in the earth's temperature due to the use of fossil fuels and other industrial processes leading to a build-up of greenhouse gases (carbon dioxide, methane, nitrous oxide, and chlorofluorocarbons) in the atmosphere. It has been known since 1896 that carbon dioxide helps stop the sun's infrared radiation from escaping into space and thus functions to maintain the earth's relatively warm temperature (greenhouse effect). There is however growing evidence that the increased levels of carbon dioxide in the atmosphere over the last century are leading to elevated global temperatures. Which could principally result in a sea level rise (through the melting of glaciers and polar ice caps) and changes to the world's vegetation patterns (through climatic changes). This in turn relates to the essays main aim, by discussing the 'view' that global warming could be restricted by these immediate consequences. One could say that the theories for changes in sea level and global vegetation patterns are more or less being proven conclusive in the form of physical evidence by means of photographs and scientific observations. Physical evidence if published in a scientific journal for example would convey the reality of global warming to the viewer, more or less proving that it was not just a scientific theory. This availability of hard evidence for the increasing global sea levels and changes in vegetation patterns would more or less 'shun' the rather weaker evidence for the other potential consequences, thus confirming that the impact of global warming was restricted. ...read more.

The soil would then be more susceptible to wind erosion and leaching by rainwater, as transpiration would be reduced therefore reducing its fertility. Eventually making current or potential agricultural activity in this area extremely difficult as well as increasing the chance of desertification occurring. Forests and animal species will find it difficult to escape from or adjust to the effects of warming because humans occupy so much land. Under global warming vegetation will shift their ranges, seeking new areas, as old habitats grow too warm. In many places, however, human development will prevent this shift. Species that find cities or farmlands blocking there way north or south may die out. Many Boreal forests, unable to propagate toward the poles fast enough, may disappear. It is estimated that within the next 100 years many species would have to migrate between 100 and 340 miles in the direction of the poles. The upper end of this range is a distance typically covered by migrating forests in millennia, not in decades. Changing vegetation patterns could also cause some types of forest to displace each other, Boreal forests for example could be come displaced by temperate deciduous forests if the changed local climate favoured the growth of deciduous trees (increased local air temperature). However much evidence points to the fact that global warming might not be restricted by global sea level rises and changes in vegetation patterns. Global warming for example could cause a spectrum of largely negative impacts on human health. ...read more.

This view of global warming being restricted to two impacts is influenced by the fact that the media and most scientific journals refer to them more often. The melting of the ice caps is much more heard of when talking about global warming than the bleaching of corals for instance, thus influencing people's perception of the potential impacts of global warming. The fact that the melting of the ice caps and changing of vegetation patterns might seem so catastrophic for the human race it can lead many people to ignore the other potential consequences. Which may have little impact for human civilisation but cause huge impacts for the globes bio-diversity and environment (non-human). One could also argue that the other impacts of global warming could be controlled by human intervention, as they are less global in terms of their impact. A greater vaccination rate or improved research into cures for diseases could for example control human health risks posed by global warming. While rising sea levels and changes to global vegetation patterns would be much more difficult to control. I firmly believe that the world's climate is the key to the intensity and distribution of the impact of global warming. Climate influences all of the major impacts of global warming, it for example causes the air temperature rise in Antarctica so causing the edges of the ice sheet to retreat, it causes the increase in ocean temperatures causing the coral reefs to bleach. It can also cause a change in local climates thus affecting global vegetation patterns. ...read more.