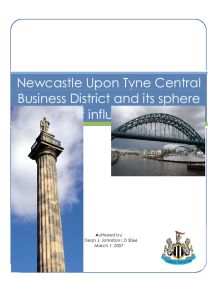 Large Central Business Districts and their Sphere of influence

Large Central Business Districts and their Sphere of influence Introduction Why has this topic been chosen? The subject of my coursework is linked to the settlement topic which is what we do in Geography GCSE. The coursework is based on Newcastle's Central Business District (CBD). Newcastle is a vibrant friendly city with a heritage spanning the past 2,000 years. Situated in the North-East of England on the banks of the river Tyne and surrounded by the scenic beauty of Northumbria. Newcastle was a centre for commercial enterprise and inventiveness, many trades and industries brought prosperity to the town including locomotive building and mining. Metro Center The Metro Centre was built in October of 1995. Located in Gateshead, the massive shopping mall has the widest variety of shops you can find in the whole of the UK. The metro centre has 330 shops such as Debenhams and Marks and Spencer. There is also the "New Metro Centre", Europe's biggest indoor theme park, shopping is a major part of city's being built. I believe the shopping centre attracts a lot of tourists that go to Newcastle because of the huge range of things to do for everyone. Sphere of influence The sphere of influence is the area served by a settlement. ...read more.

This graph shows that the majority of people visit the CBD once a week or 2-3 times a week. This shows that that transect is very popular. This graph shows that this individual transect is extremely popular because the vast majority of pedestrians questioned, visited that transects 2-3 times a week. I believe this could be because of all the services it offers. This transect was not as popular; however it still had a high majority that visited the CBD often. This shows that the more services a CBD offers the greater the SOI is. Mode of transport The ability to get to a place and the ease of it increases the chances of more people visiting that place. Newcastle itself has a wide range of transport options the most popular probably being public transport, it's easier and also cheaper than but not as convenient as private. The graph shows the majority of pedestrians questioned got to the CBD by means of public transport (bus and metro). This shows that at that time the people that were questioned got probably the easiest means of transport, and with buses and metros increasing, the amount of people that could get into the CBD from greater distances increase. ...read more.

and Cars. This was expected as these are the most obvious form of transports. This was apparent in all of the transects looking back on the Mode of transport graph. The furthest anyone had traveled from was Berwick and his purpose of visiting the Central Business District was shopping. This backs up my idea that people would travel far for shopping, this shows that Newcastle's sphere of influence reaches as far as Berwick! The land-use and the distance people traveled didn't change in my investigation, however thinking logically, people would travel further for things such as electrical stores, and Theaters. I believe each street and even possibly each shop have its own sphere of influence. This is because certain shops, e.g. USC (clothes shop) have its own sphere of influence, because they attract people from all over North Tyneside to shop there. Night clubs and other tourist attractions such as St. James Park can attract people from all over the world! Newcastle supporters in other counties could fly over just to see them play. Overall, I believe Newcastle and its Central Business District has a large sphere of influence due to all of the reasons I have discussed, including accessibility, tourist attractions, wide variety of shops and nightlife. The sphere of influence and everything that makes Newcastle the great city it is, continues to grow, expand and develop. ?? ?? ?? ?? ...read more.