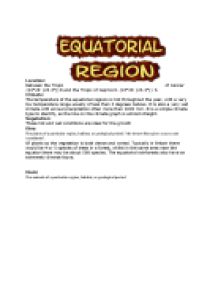 Life and Climate in the Equatorial Region

ï»¿Location: Between the Tropic of Cancer {23°26' (23.4°)}N and the Tropic of Capricorn {23°26' (23.4°)} S. Climate: The temperature of the equatorial regions is hot throughout the year, with a very low temperature range usually of less than 3 degrees Celsius. It is also a very wet climate with annual precipitation often more than 2000 mm. It is a simple climate type to identify, as the line on the climate graph is almost straight. Vegetation: These hot and wet conditions are ideal for the growth Flora. The plants of a particular region, habitat, or geological period: "the desert flora gives way to oak woodlands". ...read more.

A common type of farming was "shifting cultivation". Despite appearances, the rainforest soils are not very fertile. The heavy rainfall leaches out the important nutrients from the soil and sometimes the whole topsoil itself can be eroded by the tropical downpours. The native people realized this and so would clear an area of forest, plant crops such as manioc and cassava, and after 3 or 4 years when the soil was losing its fertility would move on to a new patch of forest, which would be cleared and cultivated. This is a sustainable style of land use as the slow growing rainforest vegetation would get a chance to re-grow. ...read more.

The climate of the area becomes drier with the loss of the vegetation acting as a "sponge" to hold on to the moisture. The soil runs off into rivers and lakes casing navigation problems. Both the burning of the trees and their reduced number increases the concentration of carbon dioxide. The extra carbon dioxide is believed to contribute to global warming, which in turn is blamed for the rise in sea level. Wildlife Here are many animals which are found in the equatorial region. Among the mammals, the animals include Chimpanzee, Gorilla, Tiger, Sun Bear, Pygmy Hippo, Okapi, Jaguar, Orangutan, Gibbon, Slow Loris and Porcupine. The reptiles include Caiman, Komodo dragon, Green Iguana, Alligator, Boa, Vine Snake, Crocodile and Gavial. The most notable birds and insects include Toucan, African Gray Parrot, Dragonfly and butterfly. ...read more.