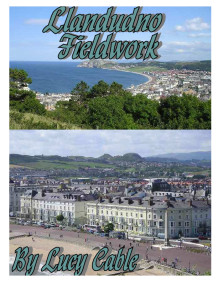 lorries or vans with deliveries for factories or other industry could enter via Maesdu Road (accessible by a roundabout) and tourists visiting Llandudno may park away from the seafront due to busy periods or expensive prices for parking. Another pointer I have noticed is that the majority of the sites we investigated had more vehicles than pedestrians travelling through them. Possible reasons for this could be: o Vehicles can travel faster than pedestrians. In the 10 minutes at each site that we used for counts more vehicles would have passed by than pedestrians for this reason. o Some areas may have been more accessible by vehicles than pedestrians. o Some visitors may just be passing through to bypass somewhere else or just pass through Llandudno as a more scenic route to wherever they may be going. The only anomalies of this finding were sites 1, 5 and 7. For sites 1 and 5 I have already stated why more pedestrians would be located there. I would predict that site 7 has more pedestrians than vehicles passing through it (71 pedestrians, 57 vehicles) because that is where the main shops are situated and so this area and beyond would be busy with people shopping for various goods meaning fewer cars, etc would pass through. Is the Hypothesis proved or disproved? Overall, I believe I have proved the hypothesis but the results were not as definite as they were for the land use survey. Having proved the hypothesis I have therefore also partly achieved my second aim of the fieldtrip to Llandudno. Although my second hypothesis was not specifically related to finding out Llandudno's Sphere of Influence, I have discovered the Sphere of Influence within Llandudno itself as being the area served by the CBD (Central Business District). This is where most shops, hotels, B & B's and offices etc are located and so this is where most people visiting Llandudno travelled for their required goods, services, leisure activities, etc. ...read more.

This was the main disadvantage of the technique used. The results could be improved by allowing only one group of four students to conduct the same investigation into building and environmental quality in Llandudno. The four individual's opinions could be averaged out for each factor of building and environmental quality in order to assume a more accurate, valued judgement. Of course, using this method would, without a doubt, take longer to complete the task. But, it would hopefully provide us with a more reliable set of results. The study would have to be repeated and another trip to Llandudno arranged. Another method which could improve the accuracy of the results a lot more would be, as I have already mentioned for land use, to organise a document, compiled by the local council, to be presented to the group. This method would probably be the only strategy of obtaining a completely accurate set of results. However, it could also be more hassling. Accuracy of Results I have already discussed the inaccuracy of the results found for building and environmental quality and I believe that they are related to problems with the methodology, also described previously. Validity of Conclusions My individual conclusions may not be related to other student's work because, as I have repeatedly mentioned throughout this evaluation section, not everybody will have interpreted the data in the same way from their presentation of the data. My conclusions may be invalid because the group did not have a large enough set of results, in my opinion and/or the results were not accurate enough. When repeated, data for hypothesis 4 would hopefully be more reliable to make conclusions from, as we would hopefully have more accurate data to interpret from. This would be because of the improvements explained previously (for hypothesis 4) to the enquiry process, after which the validity of my conclusions should increase. ?? ?? ?? ?? Llandudno Fieldwork Lucy Cable 1 ...read more.