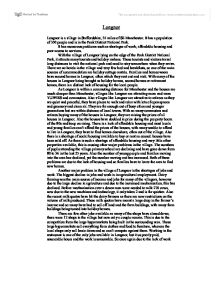 Longnor Longnor is a village in Staffordshire, 35 miles of SE Manchester. It has a population of 350 people and is in the Peak District National Park. It has numerous problems such as shortages of work, affordable housing and poor access to services. With the village of Longnor lying on the edge of the Peak District National Park, it attracts many tourists and holiday makers. These tourists and visitors travel long distances to visit the national park and need to stay somewhere when they arrive. There are no hotels in the village and very few bed and breakfasts, so one of the main sources of accommodation are holiday cottage rentals. Families and homeowners have second homes in Longnor, often which they rent out and visit. With many of the houses in Longnor being brought as holiday homes, second homes or retirement homes, there is a distinct lack of housing for the local people. As Longnor is within a commuting distance for Manchester and the houses are much cheaper than Manchester, villages like Longnor are attracting more and more YUPPIES and commuters. ...read more.

Also the number of young people and families moving into the area has declined, yet the number moving out has increased. Both of these problems are due to the lack of housing and so families have to leave the area to find new homes. Another major problem in the village of Longnor is the shortages of jobs and work. The biggest decline in jobs and work is in agricultural employment. Dairy farming was the main source of income and jobs for many of the villagers, however due to the large decline in agriculture and due to the increased mechanisation, this has declined. Before mechanisation over a dozen men were needed to milk 270 cows, now due to the new machines and technology, it only takes 2 and is far quicker. Also the recent milk quotas have hit the dairy farmers as there are now restrictions on the volume of milk produced. These milk quotas have meant a large drop in the farmer's income and so many have had to sell off land and the farm buildings, with many farm buildings being turned into holiday homes. ...read more.

Also with the decline in numbers at the school, they have had to close the secondary school in Longnor and so children have to go to Leek. However this takes 10 miles by bus and makes it a very long journey and long day for the children. Young people can't rely on the buses and most need to commute onto town for work or school each day and so most won't and need a car, however due to the lack of work they can't afford one. All of these issues are causing major problems in Longnor, with many of the locals having to move out of the area. All of these problems are caused by each other and it's like a vicious circle. The people who live in Longnor don't have work and so try and find work in other towns and villages, however they can't because of the lack of public transport and so can't afford to buy houses, and so leave and so on etc etc. once one of these issues has been tackled, the others should improve. However if nothing is done to improve the situation, the future could be bleak for Longnor. ...read more.

Overall rating: 5 out of 5 stars.
The key issues are addressed clearly and with appropriate examples and stats to support them. However, more sources of info should be included to ensure they are valid.
The conclusion does well to try to bring all of the issues together and link them.
Perhaps in the conclusion reference could be made to any possible solutions or plans for the area - either suggested by the student or researched and discussed.