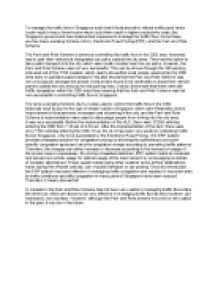 ﻿To manage the traffic flow in Singapore such that it flows smoothly without traffic jams which could result in loss of man-hours which could then result in higher productivity costs, the Singapore government has inplemented measures to manage the traffic flow. Some these are the Area Licensing Scheme (ALS), Electronic Road Pricing (ERP), and the Park and Ride Scheme. The Park-and-Ride Scheme is aimed at controlling the traffic flow in the CBD area. Motorists had to park their vehicles at designated car parks outside the city area. They had the option to take public transport into the city which were mostly located near the car parks. ...read more.

Overall, this meant that there were still traffic congestion within the CBD area thus meaning that the Park and Ride Scheme was not very successful in controlling traffic flow in Singapore. The Area Licensing Scheme (ALS), is also used to control the traffic flow in the CBD. Motorists have to pay for the use of certain roads in Singapore which were Restricted Zones. Improvement of bus services, increased cost of parking in the city, and the Park and Ride Scheme?s implementation were used to discourage people from driving into the city area. It was very successful. Before the implementation of the ALS, there were 32?500 vehicles entering the CBD from 7.30 am to 9.30 am. ...read more.

These would include using other roads to arrive at their destinations, travel during the off-peak periods, use of public transport or car-pooling. Since its introduction, the ERP system has been effective in managing traffic congestion and resulted in improvements to traffic conditions as traffic congestion in many parts of Singapore have been reduced. Therefore, it clearly shows that In conlusion, the Park and Ride Scheme has not been very useful in managing traffic flow unlike the other two which are shown to be very effective in managing traffic flow as they however, are mandatory, not voluntary. However, although the Park and Ride scheme may not be very useful in the past, it may be in the future. ...read more.

High quality spelling, punctuation and grammar, including appropriate terminology. Excellent use of relevant statistics to support key points. The source of the stats should be mentioned - this may lead to consideration of reliability. Some idea of timeline of events may be helpful. It is presumed that the systems are written up chronologically, though this may not be the case. When was each scheme introduced?