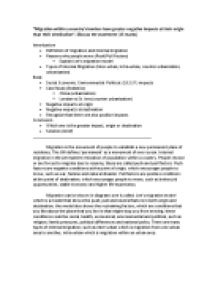 Migration within a countrys borders have greater negative impacts at their origin than their destination. Discuss.

But with the great success in the urban destination, the rural areas receive negative economic impacts such as a shortage of economically active people (16-65) to help support the community. The movement of workers form the countryside to the urban cities has caused a lot of negative political impacts in both the rural and urban area. In rural areas the migration will cause a lack in funding for farming as the number of farmers has decreased, when the people arrive in the urban area and most are able to obtain a job as construction or factory workers which mostly are temporary jobs, an example would be a construction worker builds the Beijing Olympic Stadium for a period of 3 years providing jobs for many people but after the completion of the building a large amount of people will unemployed. The temporary jobs that these migrant workers do, as seen from the example above will cause a large amount of workers to be unemployed and thus form a floating population, which is the population of people that has been cast out of urban jobs in factories and construction sites, this has caused political and social unrest towards the government. ...read more.

With most of the people from London migrating to St. Ives the population size has decreased which has made the government manage the population to be much easier, and also with less people around the amount of garbage and pollution decrease. The people travel from London to St. Ives by using commuters and a motorway (A14) located near St. Ives, as more people are travelling the commuters from both London and St. Ives will cause pollution and congestion in the motorway. As there are less people in London the tax revenue made by the government will decrease which causes less funds for local councils. In St. Ives as there are more people working there the money can be used to conserve the environment, building infrastructure, services such as shopping malls. With more people there will be an increase in the amount of labour available which results to a much more diverse community and more people working in varying professions. By looking at the examples above we can conclude that there are more negative impacts in the origin than the destination in an internal migration, as we can see from the example or urbanisation in China and counter urbanisation in the UK. There are more negative impacts in the origin in an internal migration such as congestion of motorways and floating population. ...read more.

Over all a good attempt to answer the question, using relevant examples and geographical terminology. A more detailed analysis of the evidence in the conclusion would have strengthened this essay.