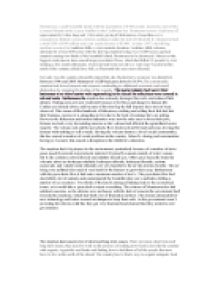 Montserrat volcano and its effects on the inhabitants.

Montserrat, a small beautiful island with the population of 4500 people, located as part of the Leeward Islands in the Lesser Antilles in the Caribbean Sea. Montserrat covers a land area of approximately 16 km long and 11 km wide, giving 40 kilometers of coastline and is considered a British overseas territory putting it under the rule of Elizabeth II. Montserrat had a total GDP of $99 million and a per capita income of $3400. In June 1997 a horrifying incident occurred in Soufriere Hills, a very touristic location. Soufriere Hills volcano, dormant for at least 400 years with the last big eruption being over 10,000 years ago had erupted causing two thirds of the beautiful island, Montserrat to be destroyed. Moreover the biggest explosion in June caused large pyroclastic flows, which had killed 19 people by over running a few small settlements. Everyone had been moved to a 'safe zone' located in the north of the country called Davy hill, as Plymouth (the area most effected) ...read more.

It typically consists mainly of water vapour, but it also contains carbon dioxide and sulphur dioxide gas. Other gases typically found in volcanic ashes are hydrogen sulphide, hydrogen chloride, hydrogen fluoride, carbon monoxide, and volatile metal chlorides are very harmful to the air the citizens breathe. The air being very polluted also made it very hard for the farmers to grow their crop, furthermore with the pyroclastic flow it had ruin a enormous number of tree's. The pyroclastic flow had also killed a lot of animals and contaminated the beautiful clear sea's and lakes; killing a number of sea creatures. Two thirds of the land is damaged linking back to the economical issues, as it would take a great deal to repair everything. The citizens of Montserrat also had political concerns, as the citizens were not happy with the lack of concern the government had towards the eruptions, which had built a lot of frustration in them. ...read more.

To conclude all my points I think Montserrat should start by finding new jobs to help the citizens economically. These jobs include mining, construction and financial services, Even though All three of these sectors are small but steady with the financial services industry providing services to around 11 offshore banks, gradually building up economically. As everyone if cramped in the north I suggest as time passes they should spread to different places This situation puts great pressure on the natural resources for instance, fishing effort is now concentrated on the northern reefs because the volcano has limited fishing areas through reef destruction and hazards to human life. It is vital that the fishing and reef status be addressed soon. Agriculture was most developed in the south thus making food resources in the north stressed. Overall, I think the enviroment had put down the country the most as half the countries jobs were taken away as farmers and fishermen, however if it did not interrupt the environment it wouldn't have linked and disturbed the country economically. ...read more.