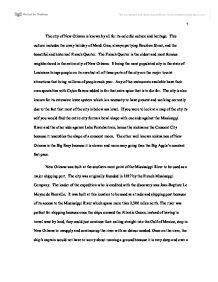 The city of New Orleans is known by all for its colorful culture and heritage. This culture includes the crazy holiday of Mardi Gras, always partying Bourbon Street, and the beautiful and historical French Quarter. The French Quarter is the oldest and most famous neighborhood in the entire city of New Orleans. It being the most populated city in the state of Louisiana brings people on its own but all of these parts of the city are the major tourist attractions that bring millions of people each year. Any of the restaurants available have their own specialties with Cajun flavors added in for that extra spice that is to die for. The city is also known for its extensive levee system which is a necessity to have present and working correctly due to the fact that most of the city is below sea level. If you were to look at a map of the city its self you would find the entire city forms a bowl shape with one side against the Mississippi River and the other side against Lake Pontchartrain, hence the nickname the Crescent City because it resembles the shape of a crescent moon. The other well known nicknames of New Orleans is the Big Easy because it is slower and more easy going than the Big Apple's constant fast pace. New Orleans was built at the southern most point of the Mississippi River to be used as a major shipping port. ...read more.

All these factors came together at once when one of the top five hurricanes in the history of the United States hit New Orleans, Louisiana in August of 2005. This hurricane is the costliest hurricane ever to hit the United States with estimated costs being over $120 billion especially for all the cities on the coast. People say that New Orleans has always been one of the most susceptible cities in the country to being hit by a natural disaster due to its location and all the erosion that has already occurred to the coastline disregarding previous natural disasters, which have affected the city more than the actual erosion itself (Infoplease, 2007). The category 3 hurricane devastated the city of New Orleans with demolishing 125 mph winds with the levee system being a very minor implication in Katrina's way. The levees broke due to what were believed to be engineering factors such as the soil being too thin which allowed water to soak in and then uprooting the steel pilings (Pesce, K., 2010). The pumps were also positioned in a bad place with them being towards the city instead of more towards Lake Pontchartrain. With the levees being destroyed the city was flooded by the Gulf of Mexico and people fled to their rooftops waiting to be rescued. The economy of New Orleans was destroyed by this catastrophe with tourism plummeting downward and people not being able to move back to their own homes after evacuating the city due to the destruction. ...read more.

Erosion will always be a major factor to deal with because of the location of New Orleans, but the people and officials of the city need to keep trying different erosion and sediment control techniques until they find one that will permanently work and save the coast from further damage than it has already taken. The control techniques should also be tried on the buffer zone because if that eventually disappears there will be no more natural protection from hurricanes and New Orleans will get destroyed every time a disaster comes its way. The cost of the damages done by Hurricane Katrina was the largest amount ever to be recorded in our nation's history, but it showed the officials the engineering mistakes that were made when building the natural disaster prevention techniques. New Orleans learned that they must upgrade all of their levees, pump stations, and their evacuation routes as soon as they could in order to protect themselves from more natural disasters. Building a perfect erosion and sediment control plan that works in every aspect is difficult to find, but the city needs as much protection as they can have available to prevent another Katrina aftermath from happening every time another natural disaster comes through the city. Through all New Orleans's hardships it brought the city closer together and made the people realize how important the geology of their city is and how they need to make a strong attempt and preserve what they have left. ...read more.