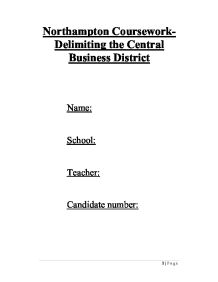 Northampton Coursework- Delimiting the Central Business District Name: School: Teacher: Candidate number: Introduction Aim To Delimit the Central Business District in Northampton. Study area My study is located in Northampton, it is a large town with total population of 197,000 (according to the 2001 census), third largest in England at 21st largest settlement in England. It is located in the East midlands region of England, roughly 67 miles North West of London and lies on the river Nene which forms the border between Cambridgeshire and Norfolk and also is the ninth longest river in England and the twelfth longest in the United Kingdom. Northampton has Junctions 15,15a and a6 of M1 London to North Yorkshire. The A45 and A43 which have primary destinations to Coventry, Rugby, Wellingborough, Kettering and Corby. Northampton has railway services to London and Birmingham provided by London Midland and Virgin Trains. Sywell aerodrome is the nearest airfield which only has a grass runway but for international links, East midlands and Luton airport are quickly accessible via M1/M6 and also by train. Bus services are operated by Stagecoach, First Northampton and MK metro form Greyfriars Bus station in the town. http://maps.google.co.uk/maps?sourceid=navclient&hl=en-GB&rlz=1T4ADBF_en-GBGB291GB291&q=northampton&um=1&ie=UTF-8&split=0&gl=uk&ei=vkMmSpOOFoGZjAfYx9jjBw&sa=X&oi=geocode_result&ct=title&resnum=1 History Northampton is the fastest growing town in England and has applied for city status. Traditionally was a shoe making and leather making town which decreased in 1960 but although some remain. Northampton in the past has been a secondary industry area but now is mainly a tertiary industry containing lots of services such as shopping malls cinemas and restraunts scattered around the town. Northampton has its own university named Northampton University. The town centre also contains many leisure and entertainment spots such as the Derngate theatre which has a capacity of 1200-1400 people at once. The Grosvenor centre and peacock place offer a large indoor shopping facilities however the market square offers an exceptional outdoor shopping facility. Local pubs also provide a great night out while on the other hand the sporting clubs offer a great chance to get involved. ...read more.

There also another boundary, which is between the multistory car park (behind Grosvenor center) and the Grosvenor centre, as frame usually contains car parks while the Grosvenor is high order so it must be in the core. Evaluation of the investigation The investigation has been a success as we have rightfully discovered the extent of the core and the frame in the CBD also boundaries of the core and the frame. The collection of all the data and reaching the conclusion worked well as a part of the investigation because useful and understandable conclusions were reached also the data was effectively collected. The time period was quite short but long enough to get basic data, however for more accurate and precise data more places within the town should have been surveyed and for that longer time period would be needed. So at least 2 day trip should be organised the next time. Also we found the CBD being an anomaly as the youngest buildings were in the core, to improve this an another study place should be selected such as Milton Keynes. The results could also be compared with a similar case study in an LEDC as this would provide a greater comparison. The data might not be reliable as this data was collected during one of the worst recession, this increases the number of the derelict buildings and the total number of shops, offices, etc in the area. For example, a particular area in Northampton before the recession area could be full of high order shops but now because of recession it may be all derelict, so this affects the reliability. This is supported as we did find derelict shops even in the Grosvenor centre. The validity is also affected, the data is still valid because there wasn't an areas that was fully or mostly derelict, the impact of the recession was spread out not targeted in a particular area. We can trust our findings as these are all factual figures collected by ourselves. ...read more.