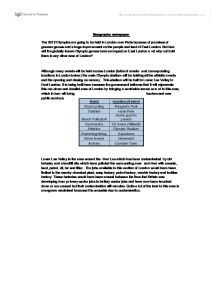 Olympic Sites 2012 - how will the globally known Olympic games have an impact on East London and why not hold them in any other area of London?

Geography newspaper The 2012 Olympics are going to be held in London over Paris because of promises of greener games and a huge improvement on the people and land of East London. But how will the globally known Olympic games have an impact on East London and why not hold them in any other area of London? Although many events will be held across London (table of events and corresponding locations in London below) the main Olympic stadium will be holding all the athletic events and the opening and closing ceremony. This stadium will be built in Lower Lea Valley in East London. It is being built here because the government believes that it will rejuvenate this run-down and derelict area of London by bringing a worldwide known event to this area, which in turn will bring tourism and new public services. Event location of event Road cycling Reagent's Park Triathlon Hyde Park Beach Volleyball Horse guard's parade Gymnastics O2 Arena (Millwall) ...read more.

this is why the main stadium has 80,000 seats of which 25,000 are permanent and the rest will be taken away after the games so the stadium will be for public use. The Olympic park will also include the Olympic village which provides over 17,000 beds for the athletes to sleep in. After the Olympics these will be converted into 3,600 new flats for the public. The Olympics will provide a lot of new jobs which will be taken up by people living in the run-down Lower Lea area. Some of these jobs will include: cleaning the stadium, security guard, media, ticket salesman, reception in each venue, help office, builders, tour guides, bus drivers, gardeners, and groundskeepers. Although these jobs are not very well paid and most of them are temporary they will still improve the standard of living to the people nearby the stadium. The Olympic games will improve the lives of the nearby residents by improving the area, providing new services and jobs. ...read more.

Overall rating: 3 out of 5 stars.
Comments:
Many useful and appropriate key descriptions and some explanations.
However, more extended explanations and secondary impacts are needed to provide more detailed impacts and effects, both positive and negative.
The use of photos/images is good, but they need to be referred to in text or given annotations to make them more useful.
Finally, a summarising conclusion will give the report a clear and useful ending.