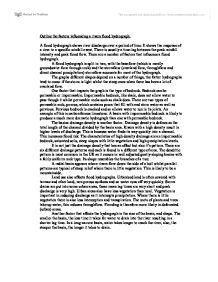 A flood hydrograph shows river discharge over a period of time. It shows the response of a river to a specific rainfall event. There is usually a time-lag between the peak rainfall intensity and peak flood flow. There are a number of factors that influence a flood hydrograph.

A flood hydrograph is split in two, with the baseflow (which is mostly groundwater flow through rock) and the stormflow (overland flow, throughflow and direct channel precipitation) stormflow accounts for most of the hydrograph.

The graphs different shapes depend on a number of things, the flatter hydrographs tend to occur if the storm is light whilst the steep ones when there has been a lot of overland flow.

One factor that impacts the graph is the type of bedrock. Bedrock can be permeable or impermeable. Impermeable bedrock, like shale, does not allow water to pass though it whilst permeable rocks such as chalk does. There are two types of permeable rock; porous, which contains pours that fill with and store water as well as pervious. Pervious bedrock is cracked and so allows water to run in its joints. An example of this is carboniferous limestone. A basin with impermeable bedrock is likely to produce a much more dramatic hydrograph than one with permeable bedrock.

The basins drainage density is another factor. Drainage density is defines as the total length of the channel divided by the basin area. Rivers with a high density result in higher levels of discharge. This is because water finds its way quickly into a channel. This increases flood risk. The characteristics of high density drainage are an impermeable bedrock, saturated soils, steep slopes with little vegetation and high precipitation levels.

It is not just the drainage density that has an effect but also it’s pattern. There are six different drainage patterns and each is found in a different type of area. The dendritic pattern is most common in the UK as it occurs in well adjusted gently-sloping basins with a fairly uniform rock type. Its shape resembles the branches of a tree.

A radial basin appears where rivers flow down the side of a hull whilst parallel patterns are typical of steep relief where there is little vegetation. This is likely to be a mountainside.

Land use also affects flood hydrographs. Urbanised land is often covered with tarmac and other hard, non porous surfaces and so water runs off very quickly. Storm drains are put into some urban areas, these mean lag times are very short and peak discharge is very high. Urban areas also have less vegetation than rural. Vegetation is important in reducing discharge as it intercepts precipitation. Where there is little vegetation there is also less interception and transpiration. The roots of plants and trees take up water, this reduces throughflow. Flooding is therefore more likely in deforested (urban) areas.

Another factor that affects the hydrograph is the size of the basin, and shape. The smaller the basin, the less time it takes for water to drain into the river resulting in a shorter lag time. In a long narrow basin, water takes longer to reach the river, also, the steeper the basin, the longer it takes to drain.

The student has done well in outlining the various factors as the question asks, and seems to cover a range of most, if not all of them. However, occasionally they seem to add detail in the wrong places, for example, ...

The student has done well in outlining the various factors as the question asks, and seems to cover a range of most, if not all of them. However, occasionally they seem to add detail in the wrong places, for example, the candidate writes very well when talking about the drainage density and basin, but not in a way that is relevant to the question asked, and which links it to the effect of the hyrdrograph. This means little marks were probably awarded to what is a well-rounded answer to another question, and the student probably wasted time on this which could be spent enhancing other areas.

It is clear that for each point more development is desirable, in the sense that many points begin well by stating a factor (and that it is a factor) and then merely describes and explains it, rather than using specific details to answer the question and link the information back to the effect on a hydrograph. In some cases, the student compares different types of factors as well, and this is not particularly relevant. For example, the 'basin with impermeable bedrock is likely to produce a much more dramatic hydrograph' statement is basic; it does not explain why this would happen, but in particular the word dramatic doesn't use enough detail to describe what would actually happen, and be shown on the graph. The lack of a conclusion is probably inconsequential, given the question, but the introduction is good- clearly defining a hydrograph and launching into the question.

The writing is mostly accurate, in terms of spelling and grammar, but the use of technical terms is sporadic. Over some areas the candidate's knowledge is clear and the terminology is well-used, but the student needs to use more technical terms related to a hydrograph and the effects to show a clear understanding of them (such as 'flashy', 'peak-flow', or 'steeper lag time' instead of just 'flatter hydrograph'). The answer is structured well, basic and satifactory with separate and clear factors at the start of each paragraph and is eloquently written in general.