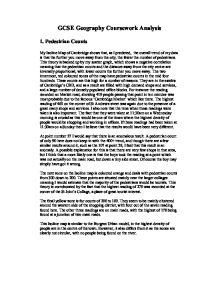 GCSE Geography Coursework Analysis 1. Pedestrian Counts My Isoline Map of Cambridge shows that, as I predicted, the overall trend of my data is that the further you move away from the city, the fewer the number of pedestrians. This theory is backed up by my scatter graph, which shows a negative correlation meaning that the pedestrian counts and the distance away from the city centre are inversely proportional, with lower counts the further you move away. The two innermost, red coloured zones of the map have pedestrian counts in the mid four hundreds. These counts are this high for a number of reasons. They are in the centre of Cambridge's CBD, and as a result are filled with high demand shops and services, and a large number of densely populated office blocks. ...read more.

If these readings had been taken at 11:30am on a Sunday then I believe that the results would have been very different. At point number 27 I would say that there is an anomalous result. A pedestrian count of only 90 here does not keep in with the 400+ trend, and though there are a few similar results around it, such as the 107 at point 28, I feel that this result is an anomaly. A possible explanation for this is that there are very few shops in that area, but I think that a more likely one is that the boys took the reading at a point which was not actually on the main road, but down a tiny side street. ...read more.

This Isoline map is similar to the Burgess Urban model, in the highest density of people are in the centre of the town. However, it also differs from it as the zones are clearly not circular, with no people being found on the river. 2. Tax Discs As you can see from my tax discs map, most (12 out of 20) of the cars I surveyed were registered in Cambridge. This fits my prediction, and the is obviously because the survey was carried out IN Cambridge, and therefore any residents surveyed were very likely to have their car registered at the placed they lived. In regard to the other 8 cars not registered in Cambridge, the ones registered in relatively far off places such as Kent and London and were most probably belonging to tourists who had come up to see Cambridge. ...read more.

Overall 4 out of 5 stars.
This section of the report is well structured and shows the elements of description, explanation and examples in SOME parts of the analysis. There is also a link to geographical theory. However there is also more opportunity for extended explanation and analysis of some findings and to make links BETWEEN different sets of data, eg. the tourist attraction of the colleges and tax disc data.