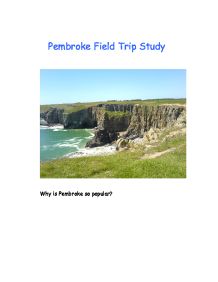 We then compared the length of the beaches from the west to the ones in the east, to see if the lengths of the beaches further east compared to the beaches in the west. I then needed to find out whether the depth of the beaches further east were increasing, compared to the beaches in the west. This was tested by using a clinometer. (7) To test my second hypothesis which was that "the benefit of people's impact on the environment is greater than the costs" we had to weigh out the pros and cons of people's impact on the environment. We did an environment assessment by ticking and crossing boxes by rating the area on it being: Quite-Noisy Pleasant-Unpleasant Distinctive-Ordinary Friendly-Unfriendly Well kept-Neglected Exciting-Dull Healthy-Unhealthy Varied-The same Stimulating-Depressing Safe-Dangerous Clean-Filthy Open-Enclosed Tidy-Untidy Beautiful-Ugly Welcoming-Hostile Attractive-Unattractive Homely-Impersonal Like-Dislike Interesting-Boring Colourful-Drab Go to-Avoid The data was made based on people's personal opinions so the data could vary to other peoples. 3 2 1 0 -1 -2 -3 Quiet Noisy Friendly Unfriendly Healthy Unhealthy Safe Dangerous Tidy Untidy Attractive Unattractive Interesting Boring Pleasant Unpleasant Well-kept Neglected Varied The same Clean Filthy Beautiful Ugly Homely Impersonal Colourful Drab Distinctive Ordinary Exciting Dull Stimulating Depressing Open Enclosed Welcoming Hostile Finally to test the third hypothesis," towns inside the national park are more populated than towns outside of it. ...read more.

It shows that in general Pembroke (a town outside the National Park) was more populated than Tenby and Saundersfoot who are both within the National Park. However Tenby had a far superior pedestrian count than those of Pembroke and Saundersfoot. Conclusion All my hypotheses with the exception of hypothesis were proven to be correct. However I don't feel that my third hypothesis was incorrect but that the data may have been incorrectly recorded in the specific task. Hypothesis 1.i, 1.ii, 1.iii all relate to each other as the pebbles and stone are getting smaller and rounder because of Long shore drift they are causing a build up of beach material on Far East beaches. If I was to do this particular study again I would change various factors such as extending the length of the trip, vary the hypothesis, increase the amount of data that I collected and also try to use more sources. In conclusion Pembrokeshire National Coast Park can be best managed by supplying the demands of as many people as possible as well as getting a good balance of the needs and wants of the locals and tourists and supervising the coastal processes also by acting against that could be dangerous or harm the park. ...read more.