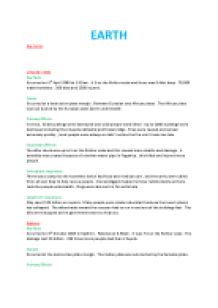 Transfer-Encoding: chunked ﻿EARTH Key terms L?Aquila ? Italy Key facts Occurred on 6th April 2008 at 3:32am . 6.3 on the Richter scale and focus was 9.4km deep . 70,000 made homeless . 300 died and 1500 injured . Cause Occurred at a destructive plate margin . Between Eurasian and African plates . The African plate was sub ducted by the Eurasian plate (went underneath) Primary Effects In Onna , 8/10 buildings were destroyed and 1/10 people were killed . Up to 1000 buildings were destroyed including the L?Aquila cathedral and fossa bridge . Fires were caused and spread extremely quickly , most people were asleep so didn?t notice the fire until it was too late . Secondary Effects The after shock was up to 5 on the Richter scale and this caused more deaths and damage . A landslide was created because of a broken water pipe in Paganica , this killed and injured more people . Immediate responses There was a camp for the homeless which had food and medical care , and the army were called from all over Italy to help rescue people . Cranes/diggers helped remove rubble slowly as there could be people underneath . Dogs were also sent in for extra help . Long term responses . Italy spent $15 billion on repairs . Many people were made redundant because their work places has collapsed . The aftershocks meant the rescuers had to run in and out of the buildings fast . The bills were stopped as the government want to help out . Kashmir Key facts Occurred on 8th October 2005 in Kashmir , Pakistan at 8.50am . It was 7.6 on the Richter scale . The damage cost $5 billion . 250 times more people died than L?Aquila Causes Occurred at the destructive plate margin . The Indian plate was sub ducted by the Eurasian plate . ...read more.

and hold rain water . 2. Sea attacking / eroding ( abrasion / hydraulic power) the base of the cliff , causing a wave cut notch to form . At the same time heavy rainfall causes the soft clay to become saturated(full of water) , causing a slip plane to from 3. The weight of the clay causes the cliff to slump or collapse . Keyhaven salt marshes This is situated between Hurst Castle spit in the west and Lymington river to the east . This reserves extends to over 2000 acres of salting?s and mudflats thus forming SSSI . SSSI is a site of special scientific interest . The area is carefully monitored and managed to maintain its rich biodiversity . The marshes east of the Lymington river become a local nature reserve in 1995. Wildlife The salt marshes and mudflats together with associated shingle ridges , support nationally and internationally a number of important birds . During the breeding season the most frequent bird is the black-headed owl with up to 7000 pairs regularly nesting in the reserve . Several species of Tern and breed here , including little , common and sandwich terns . Among breeding waders the most conspicuous are oyster-catcher , ringer plover and redshank . The plants on the reserve are also of great importance . Species common cord grass , glassworts , sea-pursiane and sea aster which looks like a Michaelmas Daisy . The uncommon golden ?sapphire is however perhaps the most common . * Cord grass ? spiky , untidy looking grass that grows fast on mudflats * Sea lavender ? attractive , colourful flowers attract wildlife * Bird ? oystercatcher , feeds and nests in the salt marshes . * Common blue butterfly ? resident butterfly , commonly found on higher marshes . * Wold spider ? clings for hours to submerged stems of cord grass waiting for low tide and food The process of vegetation succession on salt marshes 1. ...read more.

Met office action 5th December * Issued a yellow alert for winds across the north * They shared advice for the weather * There was daily multi-agency response meetings 7th December * Issued a red warning for strong winds across Scotland * Issued red/amber alerts for areas of Scotland and the north of the uk * A video forecast was spread so the public and emergency response community were well prepared . Outcome ? Everyone was prepared so people avoided potential damage . Schools were closed , reducing further disruption Anticyclones Anticyclones ? an area of high atmospheric pressure , caused by air sinking towards the ground surface . There are no clouds because the air sinks , the air needs to rise for clouds The air sinks and evaporates the moisture . Characteristics ? high pressure , hot and dry summer , cold and dry in winter . Cold air descends and warms up . Lasts for several days sometimes weeks . The wind moves clockwise in the northern hemisphere an anti clockwise in the southern hemisphere . Summer ? in both winter and summer the wind is the same , very calm and little wind . Very little precipitation because rain isn?t forming . Dry , hot and sunny . Early morning dew and mist . Heatwave conditions :thunder storms . The sun is strong . Water vapour condenses on grass to form dew . Winter ? its already and cold and clouds act as a blanket . If you don?t have clouds it is even colder , there a bigger impact in winter (losing 10 degrees) . In summer if you lost 10 degrees , it would still be warm . It?s dry , cold and bright . Early morning frost and fog . Low cloud and fog can last all day , causing gloomy conditions . Can cause icy roads and flooding from when burst pipes freeze . Isobars show air pressure . They are lines on a weather map joining places of equal atmospheric pressure. ...read more.