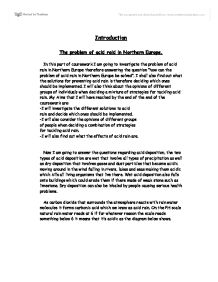 The problem of acid raid in Northern Europe.

In this part of coursework I am going to investigate the problem of acid rain in Northern Europe therefore answering the question “how can the problem of acid rain in Northern Europe be solved”. I shall also find out what the solutions for preventing acid rain is therefore deciding which ones should be implemented. I will also think about the opinions of different groups of individuals when deciding a mixture of strategies for tackling acid rain. MyAims that I will have reached by the end of the end of the coursework are:

-I will investigate the different solutions to acid

rain and decide which ones should be implemented.

-I will also consider the opinions of different groups

of people when deciding a combination of strategies

-I will also find out what the effects of acid rain are.

Now I am going to answer the questions regarding acid deposition, the two types of acid deposition are wet that involve all types of precipitation as well as dry deposition that involves gases and dust particles that become acidic moving around in the wind falling in rivers, lakes and seas making them acidic which kills all living organisms that live there. Wet acid deposition also falls onto buildings which could erode them if there made of weak stone such as limestone. Dry deposition can also be inhaled by people causing serious health problems.

As carbon dioxide that surrounds the atmosphere reacts with rain water molecules it forms carbonic acid which we know as acid rain. On the PH scale natural rain water reads at 6 if for whatever reason the scale reads something below 6 it means that it’s acidic as the diagram below shows. 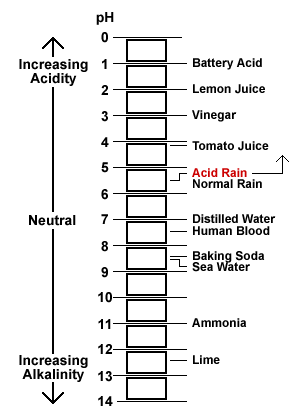 The Ph scale is a type of equipment that measures how acidic or alkaline something is for example there are numbers starting from 0 which is most acidic to 14 which is the most alkaline. Looking at the PH scale we can see that pure water has a pH value of 7 which is considered neutral—neither acidic nor alkaline. Clean rainwater has a pH value between the numbers 5.0 to 5.5. Typical acid rain has a pH value of 4.0 but when rain unites with sulphur dioxide or nitrogen oxide the rain develop into being more acidic.

The problem of acid rain was first discovered in the 1950s when a lot of living organisms in lakes where seen dead. Research had proven that acidic rivers and lakes that fish had lived contained much more than average amounts of acid resulting them into death from acidic precipitation.

Winter is when acid rain is most acidic; this is because during the winter you intend to burn more fossil fuels, which then release huge amounts of waste gasses that pollute the atmosphere more than average, making more acidic rain than you usually expect in one year. 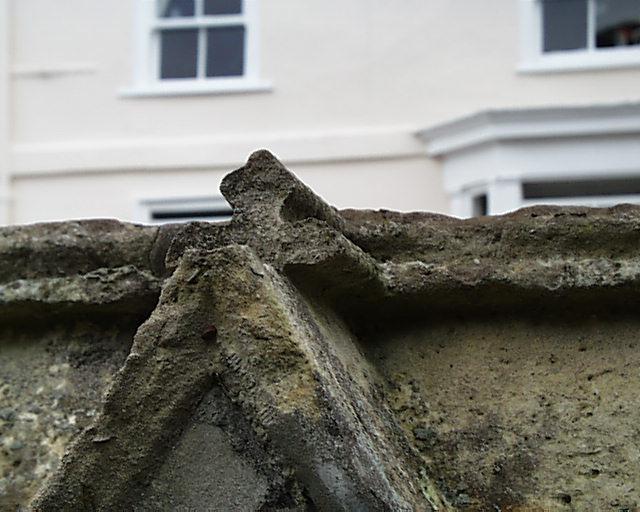 Acid rain has many severe effects on the environment; the cause of this problem is mainly down to large countries such as England, Germany and France who pollute the air with sulphur dioxide from vehicle fumes, electric power plants and other things such as burning coal. The sulphur dioxide is then carried by the prevailing south-westerly winds over the north and Baltic seas to be deposited over Scandinavia. Scandinavia is seen to cause the least amount of offences regarding sulphur dioxide pollution but they are most affected by the outcome.

The pollution that is caused by the means of acid rain can have a variety of effects on the environment that are mostly negative such as; acid rain being a form of chemical weathering on buildings that are constructed from limestone or marble.  Acid rain can also contaminate water supplies by dissolving the lead and copper pipes which transport the water to houses and other buildings. Another effect of acid rain is the pollution that is caused on lakes and reservoirs killing most of the wildlife, this includes trees plants and animal habitats 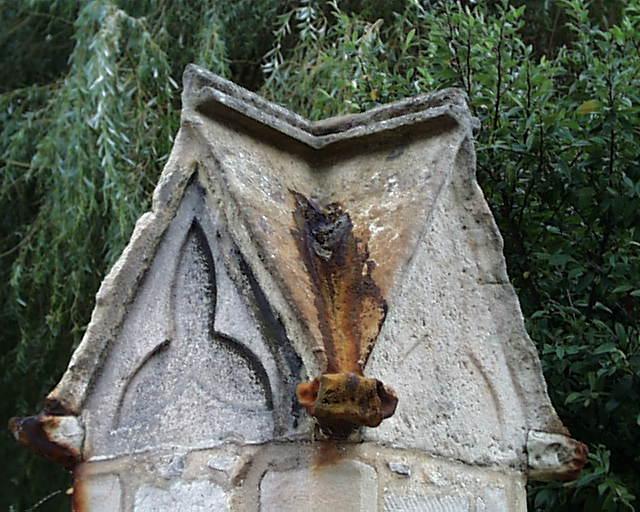 From my examination of the negative problem of acid rain I am going to put forward potential solutions to the rising crisis. In addition I am going to present my opinions of how the problem of acid rain can be cut down and then optimistically stopped on a whole. Acid rain is an international crisis, making it vital that people and the governments from all countries work together with one another in order to tackle the problem. Acid rain is caused by a diversity of effects, for example co2 emissions from vehicles and power stations and burning fossil fuels such as coal and gas. In result of this there must be more than one solution in order to prevent the problem. The three solutions I have considered to solve the problem are;

The reason I have chose this is simple it’s because nuclear power rarely causes pollution unlike coal power plus it hasa very low risk of contamination in the event of an accident. Only once have we ever had a major accident with nuclear power moreover since then more power stations have been built and they have all been handled safely resulting in clean power.

Cutting down on domestic use of electricity

The last solution I have considered was cutting down on domestic use of electricity.  This solution is very simple to be done; all it requires is turning off unused electricity such as lights and leaving electrical equipment on standby. By doing this you can save up to £3000 per year. Another excellent thing about this is that it does not cost anything to do this and it will cut down on pollution dramatically.

Out of the three solutions I have stated I believe the greatest one to be chose to put forward is cutting down on domestic use of electricity. I have chosen this because of the reason being it will not cost to be done instead it will ironically save them thousands each year. If every house in each country began to do this there will be a dramatic decrease in the use of fossil fuels which are used to provide electricity. The public will back up this solution because this will save them a lot of money through the years. The government will also back this solution as the country will decrease in the demand of electricity.

The second solution in using nuclear power is my second favorite the reason being because it will not cause any further pollution, although it will cost a huge sum of money it will be less money through the years. The down side of nuclear power is that it containslow levels of pollutants which are a form of heat pollution.

My third and final solution is repairing the damage, I have picked this reason because I think that it will keep the acid rain to a low level as the water will get neutralized ever so often. It would cost a substantial amount of money to stop the problem increasing even though the problem still may occur as. Groups that will support this solution are the government and farmers because farmers have acid rain on their crops which kill them resulting in a loss of money.