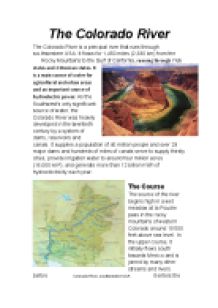 Reort on the Colorado River

﻿The Colorado River The Colorado River is a principal river that runs through southwestern USA. It flows for 1,450 miles (2,330 km) from the Rocky Mountains to the Gulf of California, running through 7 US states and 2 Mexican states. It is a main source of water for agricultural and urban areas and an important source of hydroelectric power. As the Southwest's only significant source of water, the Colorado River was heavily developed in the twentieth century by a system of dams, reservoirs and canals. It supplies a population of 40 million people and over 29 major dams and hundreds of miles of canals serve to supply thirsty cities, provide irrigation water to around four million acres (16,000 km2), and generate more than 12 billion KWh of hydroelectricity each year. The Course The source of the river begins high in a wet meadow at la Poudre pass in the rocky mountains of western Colorado around 10?000 feet above sea level. ...read more.

Continuing along the river it starts to head west. As the Colorado nears the Grand Wash Cliffs, the canyon walls drop away and the river enters Lake Mead, the largest man-made lake in the United States, on the border of Arizona and Nevada. Formed by Colorado River, US The Hoover Dam southeast of Las Vegas, this reservoir can hold almost two years of the river's flow. After passing Las Vegas, the rivers turns south again where it enters its lower course here it is joined by a few other rivers like the Gila river before it dumps its load in the sea of Cortez between the Baja Peninsula and mainland Mexico. Flora and fauna Most of the population of wildlife and plants occur in the lower cause of the Colorado, Below the Davis dam and especially in the Colorado River delta. A delta is a landform that is formed at the mouth of a river, where a river flows into an ocean, sea, lake, or reservoir. ...read more.

The Colorado is so carefully managed ? with basin reservoirs capable of holding four times the river's annual flow ? that each drop of its water is used an average of seventeen times in a single year. Glossary Dam - a barrier that impounds water and sometimes creates hydroelectric power Reservoir - an artificial body of water created by the impoundment of a dam Meander- a bend or curve in a river formed when a river erodes the outer banks widening the valley Ox-bow Lake ? a u-shaped body of water formed when a wide meander is cut off to create a lake V-shaped Valley - a valley formed by corrosion (grinding away by rock particles) along a stream bed, and erosion cuts downwards more than it does sideways, larger valley maybe called canyons. Waterfall - A waterfall is a place where flowing water rapidly drops in elevation as it flows over a steep region or a cliff. It?s formed when a river erodes away different layers of rock that have different rates of erosion, softer rocks have a quicker rate of erosion whereas harder rocks have longer rates of erosion. The soft rocks is undercutted forming a waterfall ...read more.