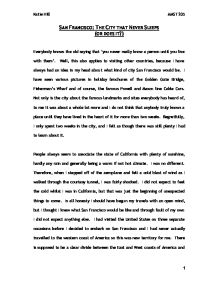 San Francisco: The City that Never Sleeps (or does it?).

SAN FRANCISCO: THE CITY THAT NEVER SLEEPS (OR DOES IT?) Everybody knows the old saying that 'you never really know a person until you live with them'. Well, this also applies to visiting other countries, because I have always had an idea in my head about what kind of city San Francisco would be. I have seen various pictures in holiday brochures of the Golden Gate Bridge, Fisherman's Wharf and of course, the famous Powell and Mason line Cable Cars. Not only is the city about the famous landmarks and sites everybody has heard of, to me it was about a whole lot more and I do not think that anybody truly knows a place until they have lived in the heart of it for more than two weeks. Regretfully, I only spent two weeks in the city, and I felt as though there was still plenty I had to learn about it. People always seem to associate the state of California with plenty of sunshine, hardly any rain and generally being a warm if not hot climate. I was no different. Therefore, when I stepped off of the aeroplane and felt a cold blast of wind as I walked through the courtesy tunnel, I was fairly shocked. I did not expect to feel the cold whilst I was in California, but that was just the beginning of unexpected things to come. In all honesty I should have begun my travels with an open mind, but I thought I knew what San Francisco would be like and through fault of my own I did not expect anything else. I had visited the United States on three separate occasions before I decided to embark on San Francisco and I had never actually travelled to the western coast of America so this was new territory for me. There is supposed to be a clear divide between the East and West coasts of America and thus knowing this, it was up to me to distinguish what these factors were. ...read more.

It seemed unimaginable that just a few hours previous and not even 5 miles away I had been alarmed by the amount of homeless people and street beggars, yet there I was staring at over one hundred sea lions housed within a small dock and I was not sure what surprised me the most. Being Saint Patrick' day the very next day, I prepared myself for a long day. I had heard on the grapevine that the American's love to celebrate on Saint Patrick's Day and I was certain that this one would not be any different. I think that the American people are very open-minded when it comes to culture, race and sexuality, but I found even more so in San Francisco. There are so many different cultures within the city and they even have designated areas of the city in which they live. The obvious one being Chinatown, but the North Beach area is home to many Italian-American's, the Castro area is renowned for its Gay and Lesbian scene, Ocean Beach is known for its Japanese culture and the Irish fit in anywhere in between. That is why it did not surprise me that on Saint Patrick's Day, a day that the Irish would be doing the most celebrating it would seem, the American's were doing their best to outdo them. After talking to many people who actually work in San Francisco, the current trend is to live elsewhere and travel into work each day. The most popular areas to live are either Oakland, which is over the eight and a half mile long Bay Bridge, or Sausalito that is in the other direction and across the Golden Gate Bridge. Having taken a trip over the Golden Gate Bridge and seeing the city from a different angle, I could certainly see why it might be tempting to live in the quieter towns and enjoy the hustle and bustle of going to work each morning. ...read more.

Previous visits to America had led me to believe that the American's were extremely fake and narrow minded, yet whilst visiting San Francisco I saw no evidence of that. Maybe that is where the east and west coast divide tends to lie, since many holidaymakers from Europe mainly visit the eastern coast of America because it is closer. Tourism brings in a lot of money to the United States from Europe and maybe that is why they try so hard in places like Florida and New York to make you feel welcome; but it just comes across as being too pushy and fake. However, a city like San Francisco with its open-mindedness to sexuality, race and religion was going to be entirely different from the beginning and it certainly was. The whole temperament of the city flows like the water around it, calm and gentle yet perhaps a little rough around the edges. Overall, If I could have changed my trip for the better, I would have become a commuter for two weeks and stayed across from the city and travelled in if and when I wanted to. However, I am glad that I stayed right within the heart of the city and witnessed the good things and the bad, yet most of the time there was hardly any bad. From what I saw of California, I liked very much and would not hesitate to go back at any given chance. I think it is important to see more than one aspect of a country and given the chance I would like to explore the state much more thoroughly, perhaps visiting Steinbeck Country and Yosemite Valley. With enough time and money I think if you really want to explore California it can be done, but finding the above is not easy unfortunately. I recommend that San Francisco should be on everybody's list of places to see before they die, it truly is a remarkable city and if its variety that you want, this place has it. Katie Hill AMST 205 1 ...read more.