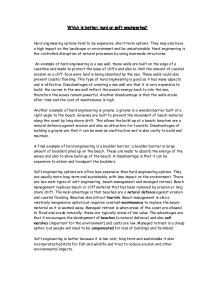 Sea Defence. Which is better: hard or soft engineering?

Which is better: hard or soft engineering? Hard engineering options tend to be expensive, short-term options. They may also have a high impact on the landscape or environment and be unsustainable. Hard engineering is the controlled disruption of natural processes by using man-made structures. An example of hard engineering is a sea wall, these walls are built on the edge of a coastline and made to protect the base of cliffs and also to limit the amount of coastal erosion on a cliff-face were land is being absorbed by the sea. These walls could also prevent coastal flooding. This type of hard engineering is good as it has many aspects and is effective. ...read more.

Groynes are built to prevent the movement of beach material along the coast by long shore drift. This allows the build-up of a beach; beaches are a natural defence against erosion and also an attraction for tourists. Disadvantages of building a groyne are that it can be seen as unattractive and is also costly to build and maintain. A final example of hard engineering is a boulder barrier; a boulder barrier is large amount of boulders piled up on the beach. These are made to absorb the energy of the waves and also to allow build-up of the beach. ...read more.

Beaches also attract tourists. Beach management is also a relatively inexpensive option but requires constant maintenance to replace the beach material as it is washed away. Managed retreat is when areas of the coast are allowed to flood and erode naturally; these are typically areas of low value. The advantages are that it encourages the development of beaches (a natural defence) and also salt marshes (important for the environment) and costs are low. Managed retreat is a cheap option, but people will need to be compensated for loss of buildings and farmland. Soft engineering is better because it is low cost, long term and sustainable it also incorporates habitats for fish and wildlife and tries to reduce erosion and other environmental impacts. ...read more.

A generally very good review of hard and soft engineering techniques. Small tweaks as outlined in the comments would allow make this into a very strong answer.
4 stars

A very good model essay. The candidate uses a technique so that the essay flows, with a good introduction, main body of text and also conclusion. The essay is easy to read and the candidate clarifies their views and points ...

A very good model essay. The candidate uses a technique so that the essay flows, with a good introduction, main body of text and also conclusion. The essay is easy to read and the candidate clarifies their views and points succinctly showing how they understand the topic and how the different engineering types are both good and bad to give a balanced view of each.

The candidate introduces the different concepts of hard and soft engineering well with a definition of what hard engineering is. This leads on to why hard engineering is not a very good solution to a problem, using different examples and the pros and cons of each which are illustrated to a very high standard and show much consideration for impacts on the landscape as well as sustainability and expense. The candidate explains each method well. They seem to be biased to favor soft engineering as they give some of the terms in bold which I wouldn't have done because the argument should be balanced and the conclusion then makes the decision. The conclusion used is adequate because it provides a rounded view based on evidence discussed but it does not take into account the big need to keep land available for future generations.

The candidate communicates in a very easy to read manner. Geographical terminology and how the candidate understands this is spot on. Grammar, spelling and punctuation are to a high level of accuracy.