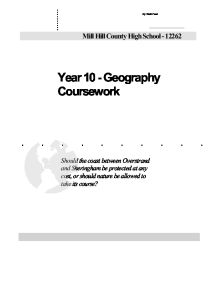 Should the coast between Overstrand and Sheringham be protected at any cost, or should nature be allowed to take its course?

By Neill Patel Mill Hill County High School - 12262 Year 10 - Geography Coursework Should the coast between Overstrand and Sheringham be protected at any cost, or should nature be allowed to take its course? Contents Section Page Part 1 - Introduction 2 Part 2 - Methodology 6 Part 3 - The Problem & Management 9 Data Presentation and Interpretation 12 Part 4 - Evaluation and Conclusion 27 Part 5 - Bibliography and Appendices 31 Part 1 Introduction Part of the Geography GCSE syllabus contains coursework that relates to Coastal defenses around the Norfolk coastline. The purpose of the coursework is to establish whether the value of the coastline in the study areas justify the money spent protecting them? Or should nature be allowed to take its course? The 3 areas studied are shown on the map below: (Figure 1) The North Norfolk coastline is designated an area of outstanding natural beauty and is 68km in length, a coastal frontage stretching from Holkham in the west to Horsey in the southeast. Sheringham (Grid ref. TG159436) is the second largest cliff-top settlement on the North Norfolk coastline. West Runton (Grid ref. TG186432) has important geology, being an area of several important archaeological finds. Overstrand (Grid ref. TG24741) is a small village; it is import due to the experimental nature of a lot of its sea defences. Below are two maps showing where the Norfolk Coastline is in relation to the 3 areas investigated (Figure 2) Geographical Theories & background information On North Norfolk's cliffed coastline, the major problem is erosion of the cliffs. The prevention of coastal erosion is termed coastal protection and is provided by Maritime District Councils. The council is responsible for both constructing and maintaining the defences on its frontage, in line with the guidance and criteria provided by the Department for Environment, Food and Rural Affairs (DEFRA) now called the MAFF. ...read more.

Riprap has the advantage of good permeability plus it looks more natural. Above, drawing of Revetments (Figure 7) From our field sketches it was clear that at West Runton the Revetments were ineffective, therefore Groynes were built to protect the coastline. Also at West Runton there was a simple wall built using Gabions cases to protect the promenade. At Overstrand our field sketch indicated the use of Revetments and that new vegetation helped reduce the erosion on the coastline. The gabion is a metal cage filled with rocks, about 1 metre by 1 Metre Square. They are stacked to form a simple wall. They are used to protect a cliff or area in the short term only, because they are easily damaged by powerful storm waves and the cages tend to rust quite quickly. Gabions have the advantage of ease of use and are relatively cheap; however their life span is relatively short. Above, drawing of a Gabion (Figure 8) Where long shore drift is a serious problem and the supply of beach material is poor, it may be necessary to supplement the natural system by adding lorry loads of sand and shingle to the beach. The natural processes will then spread the material along the coast to help build up the natural defences. This is called beach nourishment. Sometimes dredgers may be anchored offshore and the sediment sprayed on to the beach using high-pressure hoses. Above, drawing of a lorry containing sand & shingle (Figure 9) By protecting the land in the studied it has been possible to maintain and also increase the fishing activities and more importantly the tourism. The protection of such land can be a costly exercise, therefore the local authorities (The Norfolk Council) has to justify to the MAFF (the Ministry of Agriculture, Fisheries and Food) that the land must be protected. The MAFF operate a Prioritization Scoring Scheme to optimize the allocation of Grant Aid for Flood and Coastal Defence works. ...read more.

The industrial revolution resulted in a much higher demand for the benefits of a coastal land; the society demanded coastal processes. However, this development was increasingly threatened by the natural erosion and flooding processes of the coastal environment. To deal with the threat the new technologies were used to create coastal defences, on a scale unseen before, to oppose the action of the sea and protect the assets behind. Coastal development has continued throughout the last century, resulting in a continual demand for defences to protect it. Coastal defences, by their nature, disrupt the natural processes functioning on the coastline but early knowledge of these processes was somewhat limited. The time difference between the widespread construction of coastal defences and the detailed understanding of coastal processes meant that defences were often constructed in what would prove to be inappropriate. Unfortunately, by the time this was realised so much development had occurred that defences had to be maintained, even if they were causing further problems. The Coast Protection Act gave the Coast Protection Authority to do whatever it needed to protect their land in their area. The approach of coastal management for each council differed, particularly because of financial commitments. There was no long-term policy for coastal management and work was carried out on a yearly basis. The North Norfolk council became the new Coast Protection Authority and examined what coastal management they needed to carry out. They built many sea defences such as sea walls, groynes, revetment and gabion cages. Sea walls though are very expensive costing �2000- �5000 but lasts 20- 30 years. A cheaper alternative for sea walls is revetment, which cost �1200 per metre. Gabion cages are used as they are very cheap but have a short life span. We carried out a questionnaire at Overstrand asking the residents what they thought about sea defences. The questionnaire showed that all people thought that more money should be spent on sea defences. Although some defences are doing worse than good and would be better if nature took its course. ...read more.