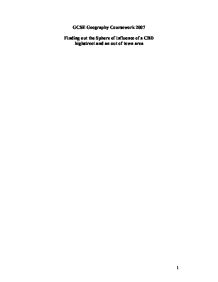 Hypothesis > I think that the retail park will have a larger sphere of influence than the highstreet in the CBD. I think this because of the nature of the shops there and the goods they sell. A large retail park is likely to hold large specialist and DIY shops which sell high order goods. This means it is likely to have a large sphere of influence. > I think shops in the retail park will be on average larger than shops on a highstreet I think this because of the location of the two retail areas. In an out of town shopping area the land is quite cheap so companies can afford to build big shops where as on a highstreet the land is very expensive so shops will be quite small. > I think there will be more public transport leading in and out of the CBD than in and out of the out of town retail park. I think this because more people go to the CBD than go to the out of town retail area. Because of this I think there will be more public transport routes. ?? ?? ?? ?? 1 ...read more.