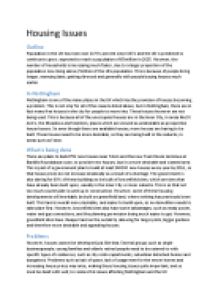 Study of Housing Issues in Nottingham

Transfer-Encoding: chunked ﻿Housing Issues Outline Population in the UK has risen over 10.5% percent since 1971 and the UK is predicted to continue to grow, expected to reach a population of 65million in 2025. However, the number of households is increasing much faster, due to a larger proportion of the population now living alone (7million of the UKs population. This is because of people living longer, marrying later, getting divorced and generally with people buying houses much earlier. In Nottingham Nottingham is one of the many places in the UK which has the provision of houses becoming a problem. ...read more.

So even though there are available houses, more houses are having to be built. These houses need to be more desirable, so they are being built in the suburbs, in areas such as Toton. What is being done There are plans to build 750 new houses near Toton and the new Tram Route terminus at Bardills Roundabout soon, to provide new houses, but in a more desirable and wanted area. This is part of a government plan to build at least 240000 new houses every year by 2016, so that house prices do not increase drastically as a result of a shortage. ...read more.

However, brownfield sites also have some advantages, such as ready power, water and gas connections, and the planning permission being much easier to get. However, greenfield sites have cheaper land on the outskirts, allowing for larger plots, bigger gardens and therefore more desirable and appealing houses. Problems However, houses cannot be developed just like that. Several groups such as single businesspeople, young families and elderly retired people need to be catered to with specific types of residences, such as city centre apartments, suburbian detached homes and bungalows. Problems such as lack of space, lack of usage even for the newer homes and increasing house prices may arise, making these housing issues quite important, and so must be dealt with well, to resolve this issues affecting Nottingham and the UK ...read more.