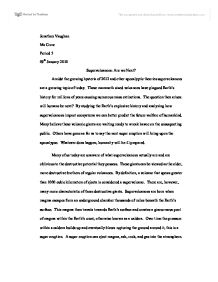 Supervolcanoes: are we next?

Jonathan Vaughan Ms Crow Period 5 09th January 2010 Supervolcanoes: Are we Next? Amidst the growing hysteria of 2012 and other apocalyptic theories supervolcanoes are a growing topic of today. These mammoth sized volcanoes have plagued Earth's history for millions of years causing numerous mass extinctions. The question then arises: will humans be next? By studying the Earth's explosive history and analyzing how supervolcanoes impact ecosystems we can better predict the future welfare of humankind. Many believe these volcanic giants are waiting ready to wreak havoc on the unsuspecting public. Others have gone as far as to say the next super eruption will bring upon the apocalypse. Whatever does happen, humanity will be ill prepared. Many of us today are unaware of what supervolcanoes actually are and are oblivious to the destructive potential they possess. These giants can be viewed as the older, more destructive brothers of regular volcanoes. By definition, a volcano that spews greater than 1000 cubic kilometers of ejecta is considered a supervolcano. There are, however, many more characteristic of these destructive giants. Supervolcanoes are born when magma escapes from an underground chamber thousands of miles beneath the Earth's surface. This magma then travels towards Earth's surface and creates a ginourmous pool of magma within the Earth's crust; otherwise known as a caldera. ...read more.

Truly, the supervolcano is nature's atomic bomb. Despite being on our planet since the dawn of age, humans still have very limited primary evidence and knowledge of supervolcanoes and how they impact the ecosystem. As a result, we turn to Earth's explosive history to learn more on how supervolcanoes could impact us today. Throughout history supervolcanoes have relentlessly devastated life on Earth. The merciless destruction of supervolcanoes has blemished our planet's history and has arguably caused two mass extinctions and the near destruction of humankind. Hundreds of millions of years ago possibly the largest super volcanic eruption Earth has ever witnessed took place. The eruption was on a scale inconceivable to man and incomparable to any other eruption on Earth within the last 500 million years. This immense eruption triggered a lava flow lasting around one million years and "flooded an area about the size of the lower 48 United States" (O'Hanlon). The devastation, however, did not stop there as the entire planet was plummeted into conditions reminiscent of a nuclear holocaust. The sky was blackened, poisonous rain fell, ash covered the entire globe, and the oceans were starved of oxygen. As a result, an incredible ninety percent of life on Earth at this point was wiped out making it the "most severe extinction event in Earth's history" (O'Hanlon). ...read more.

Supervolcanoes, in truth, are sporadic and we may never know when the next super eruption will occur. Despite this, some theorize that the next super eruption will occur on exactly December 21st 2012 and that it will bring upon the apocalypse. Within the 2012 apocalypse theory it is believed the intensity of the sun's microwaves will increase. This will then raise the temperature of the Earth's core dramatically and lead to many of the layers of the Earth's interior to melt thus allowing the Earth's plates to move more freely. The dispositioning of the plates may then disturb the calderas within the supervolcanoes triggering super eruptions. This theory proposes that the Earth will not endure merely one catastrophic super eruption but seven. The damage caused by such a chain of cataclysmic events is unfathomable. Surely not a single organism could possibly survive such a disaster. The Earth itself would be extremely unstable and could rupture beyond repair or even explode. Simply, supervolcanoes may end the world. The truth is, however, super volcanic activity is unpredictable even with the technology available today. Modern day Earth is home to seven supervolcanoes each with the destructive power of an atomic bomb. Scientists believe the Yellowstone Caldera amongst other supervolcanoes are on the verge of eruption. The future of humanity, therefore, hangs in the balance. As evident throughout history, supervolcanoes are a ruthless merciless force of nature responsible for two mass extinctions. Nothing is for certain, however, history suggests we will be next. ...read more.