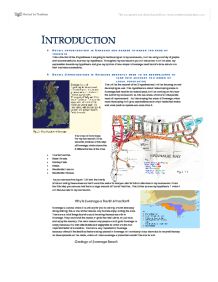 INTRODUCTION * RETAIL OPPORTUNITIES IN SWANAGE ARE GEARED TOWARDS THE NEED OF TOURISTS This is the first of the 2 hypotheses I am going to be focusing on in my coursework, I will be using a variety of graphs and relevant statistics to prove my hypothesis. Throughout my coursework you will notice how I will link back my explanation towards my hypothesis and give my opinion of how shops in Swanage need tourist's to be able to run their business successfully. * RETAIL OPPORTUNITIES IN SWANAGE URGENTLY NEED TO BE REDEVELOPED TO TAKE INTO ACCOUNT THE NEEDS OF LOCAL POPULATION This will be the second of the 2 hypothesises I will be focusing on and developing as well. This hypothesis is about redeveloping shops in Swanage that need to be redeveloped; I will be working on this near the end of my coursework as I do see areas which are in desperate need of improvement. As I developing the areas of Swanage which need developing I will give explanations as to why I made that choice and what positive impacts can come from it. Site Map of Swanage For my coursework I was asked to produce a Site Map of Swanage which shows the 6 different areas of the area. * Tourist Facilities * Retail Streets * Holiday Flats * Hotels * Residential Leisure * Residential Houses As you can see from figure 1.2 I took the liberty of colour coding these areas so that it would be easier to analyse later for future reference in my coursework. From the Site Map you can see that there is large amount of Tourist Facilities. This further proves my hypothesis 1 which I will discuss later in my coursework. Why is Swanage a Tourist Attraction? Swanage is a place where it is unlikely for you to walking around aimlessly doing nothing; this is one of the reasons why tourists enjoy visiting the area. ...read more.

Wareham was the most mentioned. The reason for this is because there is more variety of shops to visit which would keep local people interested. I would imagine that it would closer to their work so the journey would be easier. Another key reason why residents would want to shop elsewhere besides Swanage is because there us easier parking so they will be able to visit shops faster. This is one issue that will lead more local people to shop elsewhere besides swanage the reason being, no good car parking facilities. From the Pie chart it shows that 78% think that there no car parks being provided for local people. As I said before because of this issue swanage will lead local people out of the area due to the fact that they have nowhere to park their cars. These are the improvements suggested by the residents of Swanage; overall it is similar to the Tourist's improvements as both mentioned Car Park as their main concern. Both would rather excellent Car Parking than Shops, I imagine both residents and tourists are annoyed with Car Parks which is the reason they brought it up in the questionnaires. One improvement mentioned in the resident questionnaire which relates back to figure 2.2 is that people require more hairdressers. Because there are more females than males in swanage it is quite obvious that women would be demanding more womanly stores. Conclusion Gathering information from both Questionnaire it is safe to say that the main improvement it Car Parks which is an understandable request. People from swanage should take this on board and make a bigger car park in swanage. They have not got anything to lose because more car parks means more people which means more shoppers which eventually lead to money that they can use to redevelop swanage. RETAIL MAP OF SWANAGE Conclusion As you can see from the annotations I have made you can get a clear idea of the types of shops open on Institute road and Station road. ...read more.

Who will benefit? Many people will benefit from this improvement change, one group in particular would be the elderly people because I have added a quiet area away from the excitement where people can relax and enjoy the day. Residents would appreciate this, as they can be in a clam environment which would calm them down if they were stressed. The male groups will benefit because I have added a leisure facility for all popular sport, for men who like sport this is one improvement that will make swanage for enjoyable. For the female groups I have added hairdresser facilities, women from swanage will appreciate this change because there are hardly any hairdressers in swanage and having one near residential houses will benefit residential women. What do I think my plan overall Overall I feel my plan is good because it satisfies the needs of residents and there won't be any collisions with tourist shops. Everyone will be satisfied in the area they are in since the change I made to swanage. CONCLUSION AND EVALUATION Conclusion After all information gathered from questionnaires and statistics I have come to the conclusion that my hypothesis has been proven due to the fact that most all tourist and residents gave listed improvements for swanage. All the data analyzed led me to this conclusion and I feel I made that my conclusion has been proven. Although the conclusion I managed to come up with was true there are still areas in my coursework that I feel can improved. The explanations I gave for my maps and graphs could have been explained better with more evidence to prove my point. The statements I gave for development could've been explained more clearly but was still a satisfactory effort. Evaluation Overall I would say my project would be graded from a B to an A because I followed the criteria given and gave evidence to prove my point. I created diagram and graphs to prove another point. However as I said there are still areas for improvement which is the reason for the grade I have given. ...read more.