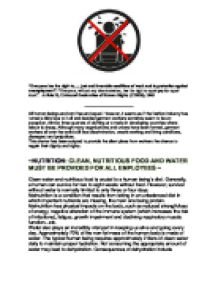 "Everyone has the right to..... just and favorable conditions of work and to protection against unemployment". "Everyone, without any discrimination, has the right to equal pay for equal work". Article 23, Universal Declaration of Human Rights (UDHR), 1948 ______________________ All human beings are born free and equal. However, it seems as if the fashion industry has turned a blind eye to it all and decided garment workers somehow seem to be an exception. Almost three quarters of clothing are made in developing countries where labour is cheap. Although many organizations and unions have been formed, garment workers all over the world still face discrimination, unsafe working and living conditions, disrespect and prejudices. This charter has been scripted to provide the silent pleas from workers the chance to regain their dignity and rights. ~NUTRITION: CLEAN, NUTRITIOUS FOOD AND WATER MUST BE PROVIDED FOR ALL EMPLOYEES ~ Clean water and nutritious food is crucial to a human being's diet. Generally, a human can survive for two to eight weeks without food. However, survival without water is normally limited to only three or four days. Malnutrition is a condition that results from taking in an unbalanced diet in which important nutrients are missing, the main one being protein. Malnutrition has physical impacts on the body, such as reduced strength/loss of energy, negative alteration of the immune system (which increases the risk of infections), fatigue, growth impairment and declining respiratory muscle function...etc. Water also plays an incredibly vital part in keeping us alive and going every day. Approximately 70% of the non-fat mass of the human body is made of water. The typical human being requires approximately 2 liters of clean water daily to maintain proper hydration. Not consuming the appropriate amount of water may lead to dehydration. Consequences of dehydration include decreased blood pressure, dizziness or fainting, headaches, constipation, irregular mood changes and seizures. Ingesting contaminated water also has unpleasant consequences. ...read more.

Bangladesh garment workers make clothes for renowned brands such as Marks & Spencer and Zara. The workers had demanded a 230% raise in their salary, which had led factory owners to decide to raise their salaries by 80%. <Figure 1: A line graph to show the increase of the minimum wages over the years (1931-2007)> Another example is Taiwan. Compared to the Bangladesh, garment workers in Taiwan have a higher minimum wage per month. The workers had asked for a 5.5% increase in their monthly pay. The Fair Labour Standards Act (FLSA) established a national minimum wage law in the U.S. Their goal was to raise minimum wages as to provide workers with the necessary amount to support their families and improve their lifestyle. <Figure 2: A table showing the percentage of people from Asian countries living on less than $1 and $2 a day- source: world bank, world development indicators> As you can tell from the table, Bangladesh garment workers are widely exploited. $1 is barely enough to buy a small amount of food for one person, let alone a whole family. Many countries that have established this regulation saw a drastic change in the attitude of employees, production rates and quality of products. Minimum wages motivates and encourages employees and provide workers with the right amount of money to support their families and meet their basic needs. Also, there has been cases in Saipan U.S, where people, 60% of the workers were foreigners, were tricked into going to work for the factories on the island. They hopeful future employees received the promise of U.S wages, which was very appealing for them as most had children to raise and/or elderly to look after. Education and proper medical health care is quite expensive and not affordable on a weak salary. However, they had to pay thousands, usually US$6,000 to pay for a working permit and the recruitment fee. ...read more.

They are also forced to suffer verbal and physical abuse. Elina, a garment worker in an Indonesian factory expressed that there was a lot of verbal abuse, and they often had to endure being called 'useless', 'worthless', 'stupid', 'dumb'...etc. In Vietnam, female workers who were found to be pregnant were immediately dismissed as they were deemed 'useless'. There are high suicide rates in factories, as some workers simply just can't handle the stress and being away from home. If all this abuse were to stop, workers would feel more safe and comfortable in their workplace and jobs. Not only will this improve relationships between employee and employer, but their mental and psychological health will also benefit. Nike had a notorious reputation for violating human rights back in the 1990s.They were accused of child labor in Cambodia and Pakistan in the year of 1990. Children were forced to manufacture soccer balls as it was easy for them as they had small hands. They had violated the minimum wages laws and overtime laws in 1996. Child labour is not uncommon, employers employ children solely for the fact that they can be paid even less than adults. Figure 4 shows young 12-year-old Tariq. He earns 60 cents for every Nike soccer ball he makes but it takes him nearly an entire day to make one. <Figure 4: Photograph of a young boy making a soccer ball for Nike> <Figure 5: Photograph of young girl stitching soccer balls for Nike> <--Silgi is only three years old. Her hands are so small that she can't even handle a pair of scissors. However, she recently started stitching soccer balls to help bring in more money. Together with her mother and four sisters, they earn 75 cents a day. ~CONCLUSION~ There are many things that could be done to improve all these people's rights. Hopefully, this will raise more awareness and people will start to gain more knowledge about the abuse and unfairness going on in our world today. In order to prevent anymore from happening, action must be taken now. ...read more.