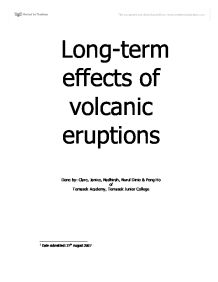 1Long-term effects of volcanic eruptions Done by: Clare, Janice, Nadhirah, Nurul Dinie & Peng Ho of Temasek Academy, Temasek Junior College Content Page 1. Introduction to Mount Pinatubo --> General information --> Long-term effects of Mount Pinatubo --> Literature Review 2. Introduction to Mauna Loa, Mount St. Helens, Krakatoa --> General information --> Long-term & immediate effects --> Literature Review 3. Comparison between the 3 volcanoes and Mount Pinatubo --> Which volcano will cause the most damage 4. Conclusion --> Why people should be concerned with the long-term effects of volcanoes --> What people can do about such effects Introduction to Mount Pinatubo Mount Pinatubo is located in Philippines, in the central area of the island of Luzon. It is bordered by 3 provinces namely Pampanga, Zambales and Tarlac. It is part of the western volcano chain that extends more than 137 miles in a north south direction. The volcano began to be active approximately around 1.1 million years ago. It is a stratovolcano that comprises of numerous lava domes surrounded by layers and layers of pyroclastic material. The volcanic eruptions of Mount Pinatubo are separated by centuries of inactivity or quiescence. This allows dense tropical vegetation to grow around the volcano during these periods of quiescence. The eruptions are usually destructive, explosive and massive in size and involve the emission of large quantities of ash and pumice. Subsequently, this results in formation of lava domes. Devastating eruption In June 1991, after about 400 years of inactivity, Pinatubo produced one of the most massive explosions the world has ever seen. Before the major explosion, a series of minor explosions and earthquakes began on June 12. ...read more.

composed of a regular cone, with a base diameter of about 7km, reaching an overall height of almost 9840 feet, approximately 3000m. A series of minor earthquakes signaled that the volcano would return to activity. The explosion of the magma accumulated in the mountains. Simultaneously, cloud of gas and debris blasted northward by the explosion and traveled at supersonic speed at an estimated temperature of 250 degree C, devastating almost 232 square miles or 600 km2 of forest land. Vertical column of gas and ash formed over the volcano reaching a height of about 16km. following that, a series of pyroclastic flow descended along the valleys of the volcano. Around 5pm paroxysmal phase of the eruption ended leaving a destroyed landscape and a gutted mountain. Following the eruption, a series of lahars added further damage to the surrounding territory causing devastation in many of the river valleys that spread out from the volcano. After the may 18 eruption, st Helens erupted 5 more times but none as intense as the first. Some small eruptions that occur during winter months melt part of the snow cover setting off lahars and avalanches. Mauna Loa Introduction Being 4km above sea level and another 13 km below sea level, the shield volcano Mauna Loa that stands at 17km above its base is known as the world's largest volcano. It is situated on the Island of Hawaii and having erupted for 33 times since 1843, it is one of most active shield volcanoes in the world. Its last eruption was in 1984. There are no records of deaths directly caused by Mauna Loa volcanic eruptions. ...read more.

Once St Helens recovers to its original cone-shape however, it is highly likely that a large-scale eruption will occur. Nevertheless, this would not happen for at least another few centuries. Mauna Loa As compared to the other two volcanoes, Mauna Loa erupts the most frequently, with 33 known eruptions since 1843. The eruptions were fairly small and non-violent-in comparison to Krakatau and St Helens -- and the long-term damage is minimal as mentioned in an earlier section in the report. Thus since the periods in between eruptions are fairly short, we conclude that the pressure-buildup is small. Hence, if Mauna Loa were to erupt again, we believe that the long-term damage would not be as devastating as Krakatau or St Helens as it will most likely be a non-violent eruption. The less violent the eruption, the amount of lava and gases emitted will be smaller. Krakatau Krakatau has not erupted since 1883, which means it has the longest period of inactivity among the three volcanoes. Hence, as mentioned earlier, since Krakatau has the longest period of quiescence, we can safely assume that the pressure-buildup is larger. Thus, we believe that the next time Krakatau erupts, the eruption will be a violent one. The more violent the explosion, the higher the probability that it will affect the climate and make radical changes to the environment. In conclusion, we believe that if Krakatau were to erupt, it would cause the most damaging long-term effects as it is highly probable that its eruption will be a violent one. Volcano eruptions will also be a concern to people. This is because, there will be a greater risk and impact on the country's economy as we venture into a more and more developed society where each event will heavily cause knock-on effect on others. ...read more.