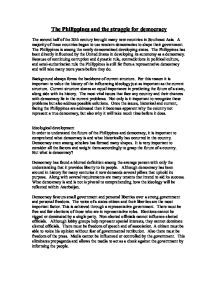 The Philippines and the struggle for democracy

The Philippines and the struggle for democracy The second half of the 20th century brought many new countries in Southeast Asia. A majority of these countries began to use western democracies to shape their government. The Philippines is among the newly democratized developing states. The Philippines has been directly influenced by the United States in developing its autonomy as a democracy. Because of continuing corruption and dynastic rule, contradictions in political culture, and semi-authoritarian rule the Philippines is still far from a representative democracy and will take many more years before they do. Background always forms the backbone of current structure. For this reason it is important to value the history of the influencing ideology just as important as the current structure. Current structure shares an equal importance in predicting the future of a state, along side with its history. The most vital issues that face any country and their chances with democracy lie in the current problems. Not only is it important to recognize these problems but also address possible solutions. Once the issues, historical and current, facing the Philippines are addressed then it becomes apparent why the country not represent a true democracy, but also why it will take much time before it does. ...read more.

Until these issues are resolved the Philippines will not represent a democracy. Corruption still haunts the Philippines. During the presidency of Marcos corruption became widely used as a political tool. Marcos was in office for 21 years. He was elected only through manipulation through corruption of the common people. It was only through a 'people movement' that Marcos was pulled out of office. The use of corruption was not only used by the highest office, but also by the governor's. The country is a patrimonial state in which its politicians relied on their connection to a majority of the common people for their vote in exchange for service, money, or safety. This is not a representative form of government for an elected official should not be bribing his/her constituents. Since the people, to insure their needs, relied on elected official, often the successors were the offspring. This presents more of a dynastic form of government. The problem has not gone away since as of 2005 no fewer than 61% of the representatives in Congress had relatives in some other elected office. Most often these now wealthy families that continue to dominate the political structure gained their wealth because of their level of position. ...read more.

Elections of politicians are of the most critical of the tenants. It is also very important for elected officials not to be influenced by non-elected officials. Government must be small and allow the liberties of its people and political culture must play an important role in strengthening democracy. The Philippines still has a lot of work to be done in all of these areas. Corruption and dynastic problems that were introduced by the first president still plague progress toward democracy. It has been more than forty years since Marcos began his reign. The progress since his presidency has required more than 15 years. To think that it will take less than five years for the change required to bring the Philippines closer to democracy is foolish. Not only is corruption an issue but also the tendency toward authoritarian practice by the executive. Political culture continues to allow authoritarian rule. With the culmination of these three issues the Philippines has a long way to go before representing a true democracy. Indicators of this are found through the over exertion of executive power to undercut liberties of workers to maintain foreign investment. Coupled with the public's mentality to allow such practices undercut the major themes of democracy. Until corruption, authoritarian rule, and political culture issues are resolved the country of the Philippines will not be a true democracy. ...read more.