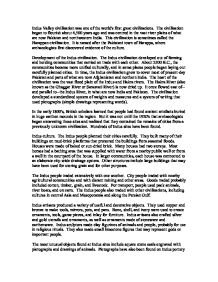 Hundreds of Indus sites have been found. Indus culture. The Indus people planned their cities carefully. They built many of their buildings on mud-brick platforms that protected the buildings from seasonal floods. Houses were made of baked or sun-dried brick. Many houses had two storeys. Most homes had a bathing area that was supplied with water from a nearby public well or from a well in the courtyard of the house. In larger communities, each house was connected to an elaborate city-wide drainage system. Other structures include large buildings that may have been used for storing grain and for other purposes. The Indus people traded extensively with one another. City people traded with nearby agricultural communities and with distant mining and other areas. ...read more.

Pictographs have also been found on Indus pottery and other objects. However, scholars have been unable to decipher what the writings mean. The Indus people buried their dead, often in wooden coffins along with pottery vessels. Decline of the Indus civilization. By 1700 B.C., the Indus civilization had gradually broken up into smaller cultures, called late Harappan cultures and post-Harappan cultures. The breakup was partly caused by changing river patterns. These changes included the drying up of the Hakra River and changes in the course of the Indus River. The river changes disrupted agricultural and economic systems, and many people left the cities of the Indus Valley region. However, some aspects of Indus art, agriculture, and possibly social organization continued in the smaller cultures. Some of these aspects became incorporated into a unified urban civilization that began developing throughout the region about 600 B.C. ...read more.