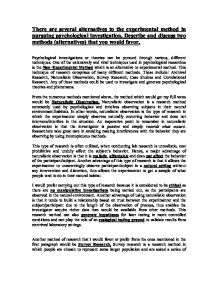 There are several alternatives to the experimental method in pursuing psychological investigation. Describe and discuss two methods (alternatives) that you would favor.

There are several alternatives to the experimental method in pursuing psychological investigation. Describe and discuss two methods (alternatives) that you would favor.

Psychological investigations or theories can be pursued through various, different techniques. One of the extensively and vital techniques used in psychological researches is the Non–Experimental Method which is an alternative to experimental method. This technique of research comprises of many different methods. These include: Archival Research, Naturalistic Observation, Survey Research, Case Studies and Correlational Research. Any of these methods could be used to investigate and generate psychological theories and phenomena.

This type of research is often utilized, when conducting lab research is unrealistic, cost prohibitive and unduly affect the subject’s behavior. Hence, a major advantage of naturalistic observation is that it is realistic, affordable and does not affect the behavior of the participant/subject. Another advantage of this type of research is that it allows the experimenter to unswervingly observe participant/subject in a natural setting without any intervention and distortion, thus allows the experimenter to get a sample of what people tend to do in their natural habitat.

I would prefer carrying out this type of research because it is considered to be ethical as there are no manipulative investigations being carried out, as the participants are observed in the natural environment. Another advantage of using naturalistic observation is that it tends to build a relationship based on trust between the experimenter and the subject/participant due to the length of the observation of process, thus enables the investigator acquire richer data than would be available from other methods. This research method can also generate hypotheses for later testing in more controlled conditions and can play the role of an ecological testing ground to validate results from contrived laboratory settings.

Another method of research that I would favor or prefer from the ones mentioned in the first paragraph would be Survey Research. Survey research is a research method in which people are chosen to represent some larger population and are asked a series of questions about their behavior, thoughts or attitudes. Survey and questionnaires are one of the most common methods used in psychological investigation. In this method, a random sample of participants completes a survey, test, or questionnaire that relates to the variable of interest. Random sampling is a vital part of ensuring that the survey results are generalized and more or less a representation of the larger populations’ attributes. The basis of survey research is on the policy which says – “There is no straighter forward way of finding out what people think, feel and do than asking them directly.” For this reason, surveys are an important research method. A survey may focus on opinions or factual information acquired from the people depending on its purpose.

A major advantage of using this type of research method is that it is an efficient way of collecting information from a large number of respondents. This method of research has the possibility of very large samples which is advantageous to generate accurate and precise results. Survey research can also be useful to determine validity, reliability and statistical significance of the findings/output. Another advantage of survey research is that it is cheap and fast. This means that experimenters can collect large amount of data in a relatively short amount of time and by spending less amount of money.

This method of research is more flexible than some other methods, in the sense that a wide range of information can be collected and can be used to study attitudes, values, beliefs and past behaviors. Information obtained through survey research is standardized, thus making it relatively free from several types of errors, and this is one main reason why this research method is one of my favorites. Data collection through survey research is economical as mentioned earlier, in terms of providing standardized questions. This means that only questions of interest to the researcher are asked, recorded, codified and analyzed, thus time and money is not spent on tangential questions.

After outlining the several different advantages of Naturalistic Observation i.e. realistic, affordable, carried out in the natural setting and does not affect the behavior of the subject and of Survey Research i.e. efficient, accurate, economical [cheap and fast], flexible and free from errors in the above article, one can understand why these two methods of research are amongst my favorites when it comes to investigating psychological theories through non-experimental techniques.