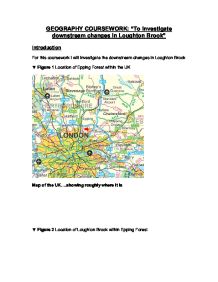 GEOGRAPHY COURSEWORK: "To investigate downstream changes in Loughton Brook" Introduction For this coursework I will investigate the downstream changes in Loughton Brook ? Figure 1 Location of Epping Forest within the UK Map of the UK....showing roughly where it is ? Figure 2 Location of Loughton Brook within Epping Forest Loughton Brook is located in Epping Forest, an area of woodland in south-east England. Formed in approximately 8000BC after the last ice age, it covers 6,300 acres (approx. 24km�). Epping Forest contains areas of grassland, rivers, heath, ponds and bogs. It is approximately 18km long by 4km wide, but is considerably narrower in most places. The forest lies on a ridge between the valleys of the river Lea and Roding. It is on a watershed separating two drainage basins. The age of the forest and the range of habitats it contains make it a valuable area for wild life and it is designated as a Site of Special Scientific Interest. This meaning an area identified by English Nature or Countryside Council for Wales for protection by reason of the rarity of its nature conservation or wildlife features. Due to soil and relief, historically Epping Forest has been unsuitable for agriculture. The land is mainly used for research and recreational purposes e.g. mountain biking. The rocks and soil of Epping include pebble gravel, bang shot beds, clay gate beds and London clay. ?Figure 3 The Water Cycle From figure 2 it can be seen that water falls on to Epping Forest and flows downhill to the River Roding by means of surface runoff, through flow and ground water flow. ...read more.

The following characteristics of the river were measured: Equipment: Description of the methods: The following are a description of the various data collection methods used in our investigation: Water Width We used a tape measure to calculate the length of the water surface between the left and right bank. The tape was taut, as perpendicular as possible to the both banks and just touching the surface when the measurement was taken. The tape measure was used to calculate the water width because the width of the river (in site 2 and 3) was greater then one meter making the meter ruler unsuitable for the task. We measured the Water Width to test out the hypothesis: water width will increase the further downstream of Loughton Brook. More tributaries will result in more water which should result in more erosion making the river wider. Wetted Perimeter The wetted perimeter is the total length of the bed and the water width added together. In preparation to take this measurement we cleared the leaves from the river bed. The tape measure was then laid on the river bed and the distance from left bank to right bank was measured. The tape measure was most suited to this task due to its flexibility. Hence, the curved surfaces in the river bed could be measured accurately. We measured the Wetted Perimeter to test out the hypothesis: the volume of water in the channel would increase the further down stream of Loughton Brook. ...read more.