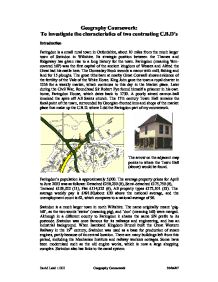 To investigate the characteristics of two contrasting C.B.D's.

Geography Coursework: To investigate the characteristics of two contrasting C.B.D's Introduction Faringdon is a small rural town in Oxfordshire, about 10 miles from the much larger town of Swindon in Wiltshire. Its strategic position between the Thames and Ridgeway has given rise to a long history for the town. Faringdon (meaning 'fern-covered hill') was the first capital of the ancient kingdom of Wessex and Alfred the Great had his castle here. The Domesday Book records a manor with mill, fishing and land for 15 ploughs. The great tithe barn at nearby Great Coxwell shows evidence of the fertility of the Vale of the White Horse. King John gave the town a royal charter in 1216 for a weekly market, which continues to this day in the Market place. Later during the Civil War, Roundhead Sir Robert Pye found himself a prisoner in his own home, Faringdon House, which dates back to 1730. A poorly aimed cannon-ball knocked the spire off All Saints church. The 17th century Town Hall remains the focal point of the town, surrounded by Georgian-fronted inns and shops of the market place that make up the C.B.D. where I did the Faringdon part of my coursework. The arrow on the adjacent map points to where the Town Hall (above) would be found. Faringdon's population is approximately 5,000. The average property prices for April to June 2003 was as follows: Detached �258,230 (8), Semi-detached �175,750 (8), Terraced �138,322 (11), Flat �114,325 (6), All property types �172,101 (33). The average weekly pay is �491.80,about �20 above the national average, and the unemployment count is 62, which compares to a national average of 96. Swindon is a much larger town in north Wiltshire. The name originally meant 'pig-hill', as the two words 'swine' (meaning pig), and 'don' (meaning hill) were merged. Although in a different county to Faringdon it shares the same SN prefix to its postcode. ...read more.

The entire C.B.D in Swindon is pedestrianised, so there is no variation on this factor throughout the area, as each location scored 3 points. Regent Street had the highest E.Q. in Swindon, and was higher than that of Faringdon. In Regent Street, the environmental quality was equal at locations 1 & 2, as the different factors scored the same amount of points at each place. This is because they are nearer to the centre where all four streets meet, and this area was renovated and had improvements made all at the same time. The improvements stretched as far a point 2 in Regent Street, so they both achieved the same E.Q. At locations 3, all of the factors scored the same as at points 1 & 2 except the score for Plants. This was considerably higher, because of the introduction of trees. The final three locations were all equal in total, but lower building maintenance was recorded at both. This was probably because the buildings here used by smaller shops that have less money to spend on maintaining the look of their buildings. There was the best score for plants here, as there were trees and flowerbeds, all introduced by the council to improve this area. There was little litter along the entire street, possibly because it is cleaned regularly by the council. The total E.Q. for Regent Street was 76 Canal walk had a low environmental quality at location 1 because the noise here was very bad, and there were no plants. The renovations and improvements that the council made to the centre area did not include plants, and noise was one thing that they could not control. Other than this, the E.Q. was reasonable. The buildings were reasonably well maintained and tidy, and the pavements were excellent, because when improvements were made, the entire area was paved in an attractive pattern. The location was unfortunately very noisy though, so it scored no points for this. ...read more.

If they want to do their grocery shopping they will probably fall into the sphere of influence of a small town, and will be prepared to travel slightly further. If they want to buy a car or television, they will fall into the sphere of influence of the large town where bigger and possibly better shops are, and are prepared to travel the longer distance for expensive items. Land Use Survey I have presented the land use surveys for the two towns on two maps of the C.B.D.'s. From these we can see that the main land use in Faringdon's C.B.D. is split between housing and low order retail. Gloucester Street consists mainly of housing, but there are a few services nearer the Market Place. Marlborough Street is a mixture of housing, retail, services, offices and public buildings. London Street is about half housing and half retail, with most of the retail at the end closest to the Market Place. Church Street was all housing except for the church, which came under public buildings, and took up most of one side. The Market Place was the only place to have no housing, and it was instead a mixture of retail, entertainment, services and public buildings. In Swindon, as we can see from the map, the central business district is almost completely made up of retail. The Parade consists only of retail, and Regent Street is mainly retail, with the exception of four services and one entertainment building. Canal walk has only three buildings used for services, and two finance buildings. The rest are all retail. Bridge Street is the only street to have more other buildings than buildings used for retail. It has seven finance buildings, and seven entertainment buildings. Swindon's C.B.D. is a good example of how shops of the same type, such as retail, group together. Bridge Street is where the entertainment and finance companies group, and The Parade, Regent Street and Canal walk are where most retail is found. David Laird 11RH Geography Coursework 30/04/07 ...read more.