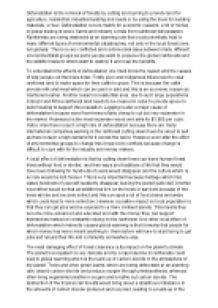 To understand the effects of deforestation one must know the reason and the causes.

﻿Deforestation is the removal of forests by cutting and burning to provide land for agriculture, residential, industrial building and roads or by using the trees for building materials, or fuel. Deforestation occurs mainly for economic reasons; a lot of money in global trading of wood, farms and industry comes from rainforest deforestation. Rainforests are being destroyed at an alarming rate that could potentially lead to many different types of environmental catastrophes, not only in the local forest zone, but globally. This is a very conflicted and controversial issue between many different environmentalist groups as some people want to preserve the global rainforests and the wildlife however others want to destroy it and reap the benefits. To understand the effects of deforestation one must know the reason and the causes of why people cut the trees down. Firstly poor and indigenous tribes need to clear rainforest land to make space for their cattle to graze. ...read more.

However a positive impact on local population is that they can get jobs and be exposed to a more civilised society. This means they become more advanced and educated and with the money they can support themselves instead of constantly relying on the rainforest. One other local effect of deforestation which indirectly causes global warming is that it means that people for which money has never meant anything to them before will have to start trying to get jobs and rebuild their life and community somewhere else. The most damaging effect of forest clearance is its impact on the planet's climate. The planet?s ecosystem is very delicate and by a rapid decline in rainforests could lead to global warming which is the build-up of carbon dioxide in the atmosphere of the planet. Trees and other green plants, which are being deforested at an alarming rate, absorb carbon dioxide and produce oxygen through photosynthesis, whereas other living organisms breathe in oxygen and breathe out carbon dioxide. ...read more.

Currently when it rains the water is absorbed into the soil and is then taken in by the trees but it also goes on to many streams and rivers which then go on to be used as water supplies for people however when trees and plants are uprooted the soil tends to get worse and lose all of its good features and eventually it would dry up and none would be left causing water shortages in local areas. However there are solutions to prevent these problems going any further and still continue to be able live a sustainable lifestyle; Big, global companies need to start taking action that will create a ?renewable rainforest?, for example for every tree they cut down they should plant two. Of course it is not an easy process but the government, the people and the loggers must start cooperating to ensure that the rainforest will not be wiped out altogether. Statistics show that in only 50 years? time, the entire tropical rainforest can be wiped out forever . ...read more.